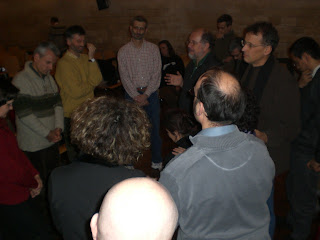 On Saturday, November 17 after a rich five days with Scripture Union in Alsace I flew to Paris to spend the weekend ministering in the Église Reformée de Belleville followed by a three-day retreat for French reformed pastors.

The church is Belleville is one of the largest churches in the Église Reformée de France. Like many churches in Paris, its membership is diverse: many French people together with first and second generation immigrants from Africa and other countries. I even met a woman from Mexico and people from Columbia. The Belleville church is at the heart of the section of Paris with the largest Jewish community, many North African immigrants and a burgeoning arts scene. Unlike most churches in the Église Reformée de France which are highly intellectual and traditional, Belleville is more evangelical and has been deeply influenced by charismatic renewal.

Serge Jacquemus is the pastor– a good friend who did graduate studies with me in Montpellier in 1991 who I later met up with in 2004 at a pastor’s conference at the Toronto Airport Christian Fellowship. Randy Greer is an American missionary friend of mine also ministering at Belleville. He leads an inspiring after-school program serving North African immigrant youth. Serge has invited me to minister in Paris for the past few years, hoping to see his church reach out more effectively to the neighborhood, empowered by the Holy Spirit. I arrived in the middle of a national transportation strike, but the Saturday afternoon training drew many people. We acted out Jesus’ encounter with the woman caught in adultery and the woman bent over by an evil spirit. These stories served as a basis for inviting people to drop their stones of accusation and to step into Jesus’ ministry of announcing forgiveness and deliverance from evil spirits. Nearly everyone came up at the end to receive prayer for freedom from invisible powers that oppress them (shame, guilt, fear, unworthiness).

Sunday morning I preached two services to the 500 member church. I spoke on the Spirit upon Jesus and the anointing for ministry to the poor, prisoners, the blind and oppressed based on Luke 4:18ff, ending with fire tunnels where everyone could lay hands on everyone. People enthusiastically engaged in this style of prayer after I presented it as a near perfect enactment of the values of the French revolution: liberté, égalité, fraternité (freedom, equality, brotherhood). The priesthood of all believers happened as people excitedly formed two long lines facing each other to make a prayer tunnel. Nearly everyone in each service passed through at least once, receiving prayer from the many who laid hands on them calling for God’s Spirit to come to heal, fill and empower.

A three-day pastor’s conference began the next day at noon. Since all the trains and subways were still nearly shut down by the national strike, only 20 or so pastors were able to make it to the retreat. This was ideal since the focus of the retreat was on ministering personally to each pastor. Pastoring in France is particularly challenging. French society is increasingly fast-paced and impressively secular. Pastors of the historic Église Reformée often minister in traditional parishes to small, aging congregations made up of members often spread out in a wide geographic area. Ministry opportunities to non-Christians are very challenging. The majority immigrant population is North African and Muslim. Pastors are highly trained professionals who know Scripture and theology well, but have had little training in ministering physical and inner healing, deliverance and prophetic ministry. Though they place a high value on the priesthood of all believers, they often feel stuck when it comes to really seeing parishioners get empowered to step into their callings.

My focus was to help them become more secure in a Biblical theology of empowerment based on Ephesians 1:3ff and 2:7ff and many other texts and in ministry with the gifts of the Spirit (Eph 4:7-10; 1 Cor 12-14). Many pastors bear the weight of an entire congregation’s calling and suffer under their own and other’s expectations that they have to be gifted to meet every need. My hope was that they would become more comfortable receiving more from the Holy Spirit and facilitating people’s empowerment to move in the gifts of the Spirit. I presented on the five-fold vision of ministry in Ephesians 4:11-16 and we discussed and practiced how to identify and recruit people into callings such as apostle, prophet, evangelist, pastor and teacher with the objective of equipping all the people (Eph 4:11-12).

We used a “prophetic presbytery” style of prayer we practice every week as a staff at Tierra Nueva. This involves laying hands on each other, blessing, praying and sharing impressions, pictures, scriptures—perhaps in some way similar to ways early Christians ministered to each other (Acts 13:2-3; 19:6; 1 Tim 4:14; 2 Tim 1:6). After beautiful worship and some teaching, over the course of three days each pastor had a turn to sit in the middle of a circle to receive prayer and prophetic words of encouragement and direction from the leaders of the pastoral, each other and me. We laid hands on each one and invited the Holy Spirit to come to fill, bless and reveal. It was amazing to see how God spoke consistently and personally words of clear encouragement, comfort, clarification of gifting and direction. After praying for some 25 people each one of us had significantly more experience by the end of this retreat to take this model back to our ministries and parishes. There is still so much to learn about discernment of spiritual gifts and empowerment for life and ministry, but I came home deeply encouraged by the power of people humbly gathering around each other to bless and build up.

Please keep these French pastors and the Belleville church in your prayers: that the Spirit would keep filling them more and more. That the light of Christ would shine brightly on them and through them for their families, communities and for France.