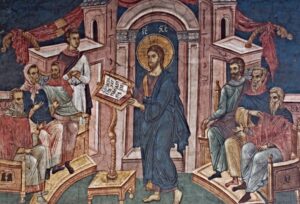 Reading and enacting Mark 6 with 14 young adults from France, Poland, in Hungary in Budapest at the end of July brought the public ministry of Jesus into sharp focus.

We read how Jesus taught in his hometown synagogue. At first his fellow villagers were impressed, asking: “where did he get these things?” They wondered how someone ordinary, like them, could have such wisdom and perform miracles. But then they took offense.

“Isn’t this the carpenter, the son of Mary, and brother of James, and Joses, and Judas, and Simon? Are not his sisters here with us?”

Jesus then made his famous statement: “A prophet is not without honor except in his hometown and among his own relatives and in his own household” (Mk 6:4).

Since those familiar with Jesus wouldn’t honor him, they were unable to receive from him. He could only lay his hands on a few sick people and consequently could not advance the Kingdom of God among his own. Jesus was amazed at their unbelief. He expected them to humbly embrace him as a divine messenger, even though he was like them.

This text is highly relevant for followers of Jesus now, serving as a warning that if we are staying within our own insider community and limited subculture, our prophetic role will likely be challenged or stifled. If it happened to Jesus, it most certainly can and will happen to us.

In today’s Covid-struck, divided and even hostile environments, people tend to stay where they are comfortable, and where things are familiar and safe. Human beings self-segregate around national, ethnic, ideological and religious identities. In these settings Jesus-followers can find themselves unable to effectively minister to their own, and consequently can become discouraged by a lack of fruitfulness. Jesus’ teaching and action in Mark 6 speak to our times. But first let’s address a common misunderstanding.

Jesus’ words about himself as a prophet stop many of us from seeing this as relevant to ourselves. We can see that Jesus was a prophet—but what does that have to do with me? More than you might think!

Scripture is clear that every child of God is called to prophecy. Every human is made in God’s image and likeness (Gn 1:26), invited to represent the Kingdom of God through word and action.

When the Spirit of God was placed upon the 70 elders on Mount Sinai (and not just Moses), they prophesied, and when people took offense Moses said:  “Would that all the Lord’s people were prophets, that the Lord would put his Spirit upon them!” (Nm 11:29).

Moses’ prophetic words were realized at Pentecost, when a tongue of fire came upon the heads of all the gathered believers, and they began speaking of the mighty deeds of God in the different languages of the assembled people (Acts 2:11).

Peter interprets Pentecost as the fulfillment of the Joel 2:28 prophecy that in the last days God would pour out the Spirit on all humankind, empowering people to have visions, dreams and to prophecy (Acts 2:17).

Paul himself urges believers to “pursue love, yet desire eagerly the spiritual gifts, especially that you may prophecy” (1 Cor 14:1).

Jesus states clearly here that a prophet (you, me) will not be honored in our homeland (patris), racial/ethnic group (sungenes), and household (oikia)— manifestations of the powers and principalities created by and for Christ (Col 1:16), which become empowered by unclean spirits when they are worshipped.

These same categories God called Abraham to take leave of so he could be a blessing to “all the families of the earth” (Gn 12:1-4). Jesus himself left his hometown to teach in the surrounding villages (Mk 6:6)– though he continued to engage with his own resistant people.

In Mark 6:7-13 Jesus sends out his twelve disciples in pairs, giving them authority over unclean spirits (which would include spirits associated with nations, cities, ethnicities, organizations, political entities, businesses, religions, idols, etc…).

After studying Mark 6 we headed to downtown Budapest, dividing up into three to four people, including a Hungarian in each group to translate. Most had never ventured onto the streets in any kind of public witness, and would find it much harder to do this in their own countries and neighborhoods than in a foreign place like Hungary. Once out on the streets in my small group the Hungarian woman translating for us made an interesting observation.

“Hungarians are not used to being approached by one another in public,” she said. “People are wary as the only ones that do this are Jehovah’s witnesses or Hare Krishnas.”

“When a foreigner approaches, Hungarians are more receptive,” she continued. “They are more curious and sometimes can even feel honored.”

From then on one of the non-Hungarians in our group was the first to speak when we approached Hungarians, even if it was in English, and this in fact seemed to work better. Many Hungarians received prayers of blessing and healing from our majority non-Hungarian teams. Immigrants we encountered from other nations (Thai, Kenyan, Palestinian) seemed even more receptive.

In contrast to Jesus, who could only “lay his hands on a few sick people and heal them” in his hometown due to people’s taking offense and unbelief, the twelve disciples appear to have been received as prophets, who preached, like John the Baptist (1:4), that people should repent (6:12). They “were casting out many demons and were anointing with oil many sick people and healing them” (Mk 6:13). Our groups in Budapest also found that most people we encountered on the streets were open to receiving prayer.

So, if Jesus himself was minimally fruitful ministering among his own, how much more might we his followers today find ourselves blocked in our prophetic function, when people overly familiar with us take offense and resist believing that we too are deputized to advance Jesus’ movement in the world.

This does not mean that we should give up on the people from our homeland, ethnicity and family. Jesus was amazed at his fellow townspeople’s unbelief, suggesting that he hoped to be received. Jesus did not give up, nor did he bow to the pressure to conform to groupthink in the interests of unity.

Jesus went out of his way to expose and denounce Israel’s past inability to receive from their own prophets (Elijah and Elisha)– in contrast to a foreign widow from Zarephath who received miraculous provision from Elijah during a famine, and an enemy Syrian military commander Naaman, who was cleansed of leprosy by Elisha. Jesus’ prophetic challenge was met by his villagers’ attempt to throw him off a cliff (Luke 4:24-30).

Despite his people’s resistance, Jesus continued to engage with them, even though they rejected him to the point of calling for his execution, a dishonor that was foreseen by an earlier prophet: “He was a man in suffering, and acquainted with the bearing of sickness, for his face is turned from us; he was dishonored, and not esteemed (LXX Isaiah 53:3).

May you wisely resist the pressures to remain silent or give up your prophetic role in your own familiar circles. May you grow in your authority over the unclean spirits of our day and age, and go outside your comfort zones and circles of relative sameness, empowered by the Holy Spirit.

As you engage prophetically with your own community and step out beyond the limits of homeland, ethnicity and family, may you experience greater fruitfulness, joining in fulfilling the promise to Abraham to be a blessing to every family on the planet.

Consider joining us for a new cohort of our Certificate in Transformational Ministry at the Margins which addresses questions like these, designed for those already serving (or feeling called to pioneer work) amongst poor and marginalized communities. This 12-week CTMM 2021 Module 1 training begins Sept 28, Tuesdays 12:00-1:30pm (PDT).
https://www.peoplesseminary.org/product-page/newctmm2021
Visit our website for more information: http://www.peoplesseminary.org