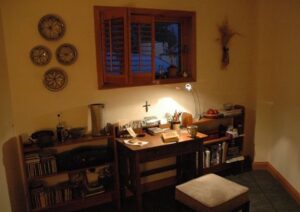 Over the past two weeks I’ve been reading and discussing Isaiah 26 with individuals and groups, finding it both challenging and comforting as we seek to understand these dark times.

People facing poverty, imprisonment, and other hardships find Isaiah’s radical message hopeful. Like my Honduran friend David, who reads the Bible with villagers in extreme poverty. Or a group of ten Triqui-speaking farm workers from Mexico currently unemployed, waiting out the months when there’s no field work. And our own Tierra Nueva faith community, made up of many who work hard jobs to put food on the table, plus others who are homeless, recently released from prison, out on bail, or struggling with addiction.

At each reading it seems the Spirit whispers to me, alerting me to pay close attention as these verses are highly relevant now.

Isaiah’s prophetic song expresses a notable separation evident through the chapter: Between those who trust in God and those who don’t. Between the righteous and wicked, the poor and the rich, the helpless and the powerful, the humble and the arrogant. There’s a call echoing throughout to trust in God as a refuge.

“We have a strong city; he sets up walls and ramparts for security. “Open the gates, that the righteous nation may enter, the one that remains faithful.“ The steadfast of mind you will keep in perfect peace, because he trusts in you. “Trust in the Lord forever, for in God the Lord, we have an everlasting rock” (1:1-3).

This promise of security, free passage into God’s city, and invitation to trust comforts our people, who have little else available to them: not enough money, no pension plan or job security. They desire entry into God’s refuge, and are curious and desirous of what sounds good, even if still foreign: steadfastness of mind and perfect peace. They are willing to try trusting God, without knowing exactly what this means. I want to too.

The prophet next exposes the true destiny of those the world considers above all the turmoil: powerful nations, successful organizations, billionaires, millionaires, rich politicians, corporate executives, cartel chiefs, and anyone with big salaries, amassed retirement plans and whatever people imagine brings earthly security.

“For he has brought low those who dwell on high, the unassailable city; he lays it low, he lays it low to the ground, he casts it to the dust. The foot will trample it, the feet of the afflicted, the steps of the helpless” (1:5-6).

Here the prophet Isaiah speaks about the not-yet-visible destiny of Judah’s elite at a time when they felt and looked invincible. In the face of what appeared a “high, unassailable city,” God’s judgment is announced as more real than visible reality. These words echo earlier words in Isaiah 2:12.

The prophet’s warnings were later realized when the Babylonian army attacked, destroying Jerusalem and carrying off Judah’s elite into exile.  Isaiah’s prophecy continued to speak to later generations, and certainly our own.

Mary’s song celebrating Jesus’ coming birth echoes these same ominous words of judgment of the powerful and raising up of the vulnerable.

“He has done mighty deeds with his arm; he has scattered those who were proud in the thoughts of their heart. “He has brought down rulers from their thrones, and has exalted those who were humble. “He has filled the hungry with good things; and sent away the rich empty-handed” (Lk 1:51-53).

In contrast, Isaiah presents a way forward for those who put their trust in God:

“The way of the righteous is smooth; O Upright One, make the path of the righteous level. Indeed, while following the way of your judgments, O Lord, we have waited for you eagerly; your name, even your memory, is the desire of our souls. At night my soul longs for you, indeed, my spirit within me seeks you diligently; For when the earth experiences your judgments the inhabitants of the world learn righteousness” (26:7-9).

As someone who has served as a jail and prison chaplain now for over 26 years, I regularly see people who are experiencing judgment learning “righteousness,“ which I define as Spirit-guided living in alignment with Jesus’ life and teachings.

Adversity can really humble us, as we recognize our failings and need for forgiveness, freedom and restoration. The way doesn’t immediately become “smooth.” But when things are rough, we readily cry out with the prophet: “make the path of the righteous level!” We know what we’ve been doing hasn’t worked, and we are willing to be guided and to try to trust.

The prophet observes that “though the wicked (synonymous with the rich and powerful) are shown favor, they do not learn righteousness.”

Do you notice that when people’s wealth increases, and they benefit from tax breaks and business successes, that they become more merciful and justice-oriented? According to Isaiah they don’t, and we won’t either if we’re in that camp.

“He deals unjustly in the land of uprightness, and he does not perceive the majesty of the Lord. O Lord, your hand is lifted up yet they do not see it” (26:10-11).

In contrast, the righteous acknowledge their life of bondage to other dominating powers, confessing God’s name alone.

“O Lord our God, other masters besides you have ruled us; but through you alone we confess your name” (26:13).

The prophet then shifts attention again to the fate of the rich and unjust, declaring God’s coming judgment:

“The dead will not live, the departed spirits will not rise; therefore you have punished and destroyed them, and you have wiped out all remembrance of them” (26:14).

There’s no us-them militancy or pharisaic superiority here!  The prophet’s own community of resisters are brutally honest, recognizing their inability to save.

“We gave birth, as it seems, only to wind. We could not accomplish deliverance for the earth.”

I read this with a deep sigh as I recognize quite regularly my own inability to save anyone.

The prophet’s subsequent confession that God alone brings salvation through raising the dead, rings so true for me now, as we lose person after person from our community to overdose deaths– despite our best efforts at pastoral care, drug and alcohol rehab, relapse prevention and re-entry approaches.

The prophet then speaks to people of faith who live between the present moment and the future victory over death by resurrection. This is the time we now live in, when God’s judgment is underway. This judgment involves an extended period of shaking, where a massive reversal is happening, which will not stop until God’s justice is established on the earth.

This reversal will shake the foundations of all visible systems, as God brings the rich and powerful down, along with every structure they’ve created to secure their power and fortunes: nations, corporations, economies, denominations….  God’s justice is underway, which will result in the raising up of the poor and needy.

During this period of upheaval the prophet offers advise that may surprise. Rather than mobilizing people to reform government, to engage in class conflict, personal defense or any kind of violent struggle, the prophet calls people into an even more intimate and personal refuge that parallels the “strong city” behind walls described at the beginning of the song.

“Come, my people, enter into your rooms and close your doors behind you; hide for a little while until indignation runs its course” (26:20).

In the Greek version of this verse, the underlying word behind “room” is tameion, meaning “innermost, hidden, secret room.” This is the same word Jesus uses in his teaching about prayer in Matthew 6:6.

The Greek version of Isaiah 26:20’s call to enter your room is word-for-word the same as Matthew 6:6, apart from the verb “shut,” which in Isaiah means “to firmly shut” (apokleio).  Firmly shutting the door is urged during times of upheaval. In contrast, Jesus simply tells us to go inside and shut the door (kleio), adding that our Father is there inside awaiting us, seeing what is done in secret and ready to reward us. The Father’s presence is a stronghold.

Isaiah ends his song with words that describe a period of exposure, where injustice and crimes long covered up will be brought into plain view.

“For behold, the Lord is about to come out from his place to punish the inhabitants of the earth for their iniquity; And the earth will reveal her bloodshed and will no longer cover her slain” (26:20-21).

This is the period in which we now live, when the sins of the powerful are being brought to light. Whether that be victims of clergy, politicians (or anyone’s) sexual abuse coming forward to tell their stories, the bodies of First Nation’s children being unearthed from mass graves in Canadian residential schools, or Wiki-leaks like exposés of corruption, war atrocities, gross economic inequalities, or the disappearance of species and polar icecaps due to global warming, the movement of sacred history includes all the deeds of darkness coming into the light.

Going into our rooms and shutting the door must not be escapist. Rather it involves first a deep recognition of our worsening situation that would alert us to the need to enter our rooms. Things are only going to become more dire, and we must resist denial and false hopes.

Jesus calls us to pray to our Father there in the secret place, where our identity becomes clarified as we come to more fully know ourselves as sons and daughters in God’s family, in the Kingdom of God’s Son, Jesus Christ. There, in the secret place, we listen for words, which nurture, empower and direct our next steps, showing us our course of action, the way of righteousness, in Jesus’ liberation movement.