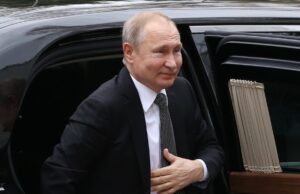 A few nights ago I had a surprisingly vivid dream featuring Russian President Vladimir Putin. I recall it now as if it were an event that actually happened.

At first I was walking behind him and an American woman I knew, who seemed determined to keep me from him. Then I saw him look at me at a gathering in a hotel, as I refused to sing some well-known American songs in English with what looked like American fans.

Then suddenly I was seated beside him in the front seat of his limo. Gracie sat beside a woman in the back seat who was maybe his wife– though I’ve since learned he’s divorced, so I’m not sure who this was. She lay back against the seat, her bare forearms covered with elaborate, symmetric tattoos.

We start talking more personally, and he immediately directs someone to pull the curtains between the back seat and the rest of the limousine, so those further back couldn’t hear or see us. Heavy black curtains are drawn, allowing for total privacy.

I tell him I’ve been praying for him. He looks skeptical, and I say:

“Mr. Putin, I mean prayer as conversation with God.”

I then remember that as Russian Orthodox Christians he and his driver would understand prayer more as rote, liturgical prayers from a prayer book. So I explain:

“I’m not talking about praying liturgical prayers, say from the Orthodox liturgy or prayer books. These prayers are precious, valuable and powerful, and we can certainly benefit from praying them. But we can also pray to God directly, conversationally about what’s on our heart and mind.

I look at him and say: “President Putin, I’ve been talking with God, with Jesus, like we’re talking now, asking him to give you wisdom to know what to do, and courage to make the right decisions.”

He visibly warms up, and looks at me with genuine interest.

I had seen some special bottles of liqueur or skin tonic. I wondered if he might give me a gift. Just then he offered me a bottle and some other gifts. I thought I should ask him how we could stay in contact in the future. But then I woke up.

This dream took me completely by surprise. I hadn’t been thinking about Putin, though I have been keeping up on the news on a daily basis regarding the Russian invasion of Ukraine. I also lead a weekly Bible study via Zoom with Russian recovery guys living near Krasnodar.

I read and hear Mr. Putin being regularly denounced as a brutal oligarch dictator, a war criminal, evil incarnate. He is often compared to Stalin or Hitler. He most certainly has blood on his hands.

However, in only demonizing Russia’s President we risk pushing him further into the darkness, from where even more destruction can be unleashed.

Throughout Scripture the prophets regularly communicated with heads of State, both in person and through letters and emissaries. These communications included intercession, as well as offers of specific counsel, warnings and outright denunciation too.

Jesus challenged the religious leaders of his day, embodying a way for saving that incorporated active love for and intercession on behalf of enemies.

“But I say to you who hear, love your enemies, do good to those who hate you, bless those who curse you, pray for those who mistreat you” (Lk 6:27-28).

The Apostle Paul was often imprisoned by the authorities of the Roman Empire who had blood on their hands– who he faithfully told about Jesus. He writes in Romans 12:14 “Bless those who persecute you; bless and do not curse,” followed by “Do not be overcome by evil, but overcome evil with good” (Rm 12:21). Paul wrote Timothy words that are certainly important to head now.

“First of all, then, I urge that entreaties and prayers, petitions and thanksgivings, be made on behalf of all people, for kings and all who are in authority, so that we may lead a tranquil and quiet life in all godliness and dignity. This is good and acceptable in the sight of God our Savior” (1 Timothy 2:1-3).

Mr. Putin has recently threatened to use nuclear weapons, which would lead to destruction like the world has never known. Certainly now is the time to include him and his political and spiritual advisors, and our own national leaders in our prayers, “so that we (followers of Jesus in the Ukraine, Russian, Europe and around the world) may lead a tranquil and quiet life in all godliness and dignity”– so we can focus our attention on advancing Jesus’ Kingdom.

In my dream I told Vladimir Putin that I pray for him. However in reality I have really only begun to actively pray for him since my dream. I invite you to join me in daily prayer for Mr. Putin, and for his advisors– including the Russian Orthodox Patriarch Kirill. Let’s remember to pray too for the Ukrainian people, leaders and soldiers– and for Russian soldiers. May we engage in active peacemaking from out of a commitment to prayer as the Apostle Paul urges in Philippians 6:18.

“With all prayer and petition pray at all times in the Spirit, and with this in view, be on the alert with all perseverance and petition for all the saints.”

I highly recommend our new webinar which just started May 4, “Preaching: Proclamation for Liberation,” (GW13). This four-session course is being taught by our good friend Vera Ezumah, a Nigerian woman theologian we met in Paris, who lived there for years but currently lives in London. Each of her four classes include valuable perspectives on preaching followed by Vera preaching a sermon to us over Zoom. This class is not just meant for pastors. It is valuable for anyone who wants to learn more about sharing the Good News! Sign up here.