I invite you to join us in a weekly online Bible study focusing on Jesus’ core teachings beginning February 5.

During the darkest and most precarious times in Israel’s history God’s presence and words brought challenge, renewal and re-orientation. Right now we need to hear fresh words from Jesus in the face of rising death tolls, partisan divisions, growing hostilities, racial injustices, and chaos due to false prophecies.

Gracie and I are feeling an urgency to experience Jesus’ core teaching afresh for our well-being and very survival. We all need God’s word as “a lamp for our feet and a light for our path” (Ps 119:105), because darkness is real and growing.

Scripture shows how God revealed himself and gave the Torah to the people in the midst of desperate and frightening times as they were tried and tested in the wilderness. He called them to total allegiance as his chosen people (Ex 19-20).

During a period when violence and idolatry were widespread among God’s people, someone found an ancient book and read it to King Josiah, who tore his clothes when he heard the words of Scripture. God’s words tenderized and humbled him as he saw how his people were facing serious consequences for failing to listen. He initiated a reform movement that involved removing the high places, exposing and eradicating idolatrous allegiances (2 Kgs 23-23). This didn’t stop the impending exile, but seems to have delayed Israel’s eventual decline.

Years later upon returning from Babylonian exile, Ezra the priest read Scripture publicly with the people, who wept when they heard it (Neh 8:9). God’s words to Solomon are certainly relevant today:

“If my people who are called by my name humble themselves, and pray and seek my face and turn from their wicked ways, then I will hear from heaven and will forgive their sin and heal their land” (2 Chr 7:14).

We feel a need for forgiveness, healing, wisdom and clear discernment as we navigate in these dark waters. Paul’s call to action in Romans 12:2 is vital for us now:

“Do not be conformed to this world, but be transformed by the renewing of your mind, so that you may prove what the will of God is, that which is good and acceptable and perfect.”

In our daily reading of the Bible Gracie and I are finding encouragement, strength and continual direction– and hopefully the renewal of our minds. We long to see a movement ignite and grow, fueled by socially-engaged Bible study, prayer and action that will  enlighten and empower Jesus followers.

We experienced this among peasants in Honduras in the 1980s and 90s, with inmates here in Washington State since then, which I’ve written up in Reading the Bible with the Damned, Guerrilla Gospel and Guerrilla Bible Studies. We are experiencing this now in weekly Zoom Bible studies and courses we’re leading with people from all over the world.

People desperately need to be informed from above, to drink from pure streams of God’s revelation—rather than feed on tendentious news, social media and entertainment. We appear to be heading towards still greater challenges and would do well to prepare now so we can endure hardships and advance Jesus’ kingdom in the face of increasing upheaval.

Jesus taught people that if they desired to build their houses on a rock that would withstand floods, they must come to him, hear his words and act on them (Lk 6:47-48).

We invite you to join us for a free weekly Guerrilla Webinar Bible study series “Basic Training for the Jesus Movement,” that will take place from 12:00-1:00pm (PST) on Fridays beginning February 5 through April 23 via Zoom. Sign up here and join us! 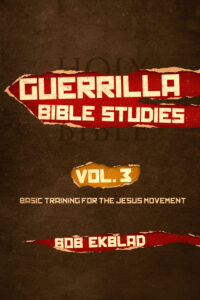