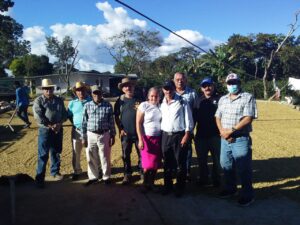 The coffee harvest is nearly complete at Tierra Nueva’s coffee farm in the high mountains near Alta Mira, Honduras. We are expecting the harvest to be even higher quality than last year, which was the highest rated coffee for taste that we’ve seen since the farm began over 16 years ago. We’re seeking sustainable alternatives to migration to N. America, including Bible studies like an amazing reflection on Genesis 13 that challenges the dominant thinking.

Since November Tierra Nueva’s farm manager has had as many as 30 local people per day picking the coffee beans. David Calix, Tierra Nueva’s Honduran pastor and overseer has included people in his hiring that most coffee producers wouldn’t: elderly people, single mothers with their kids and grade school kids on their summer breaks, which coincides with the coffee harvest from late November into February.

There’s a relentless desperation that’s gone on for years in Honduras, which hopefully will begin to ease now that a reformist president is beginning her term. The past two-term president was just arrested for drug trafficking, and awaits extradition to the USA, where he’ll likely be imprisoned for years. The country has been left in disarray, and hundreds of families are said to leave Honduras daily for the USA or Spain (read this article).

Thousands of people have migrated from the region where Tierra Nueva has served since we began in 1982. Hondurans make up the majority of immigrants crossing into the USA daily now, and a large percentage of the 3.8 million Central Americans now residing in the United States.

Tierra Nueva is paying a fair wage to coffee farm workers, who are needed for regular weeding, and seasonal harvesting, processing and drying of the beans. In this way we are offering desperately-needed income that allows people to stay in their villages and country.

David’s main role is pastoring people who other churches ignore. He visits families in their homes, offering regular Bible studies and prayers for people in a few of the surrounding villages. He’s finding people eager to study Scripture with him, and always wanting prayer for many concerns. 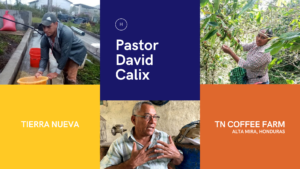 Recently he shared his excitement about a Bible study on Abraham and Lot’s separation in Genesis 13. Abraham and his nephew Lot were running into tensions, with their flocks competing for pasture. Abraham gave Lot the choice of where he wanted to settle.

Abraham chose the more difficult terrain- the arid higher ground of Canaan. The Lord blessed Abraham. In contrast, Lot ran into endless troubles and ended up losing everything.

David shared how the group of farmers with whom he studied this story pondered long and hard over Lot’s choice of security and plenty. Abraham’s choice of the difficult terrain encouraged them in their choice to live a subsistence lifestyle in Honduras, rather than succumb to the seduction of “los caminos” (the paths to N. America), which they equated with Lot’s choice (Sodom).

Lot’s departure from family (his uncle Abraham) for the fertile valley led to him being caught up in regional conflicts that he needed rescuing from (Gn 14). He was later mistreated as a foreigner by the people of Sodom (Gn 19:9)— a common experience for immigrants in N. America. Lot made choices that compromised his daughter’s safety and trust in his as their father. He ended up losing his home and his wife (Gn 19:26), experiencing homelessness and domestic chaos (Gn 19:30-38). David and his Bible study participants identified direct equivalents to Lot’s troubles in the mass migration currently underway to the USA.

Certainly it is possible to live a blessed life in Honduras, and also here in North America. However, stepping into the abundant life requires vigilance and careful deliberation. There’s a need for employment in Honduras, and we continue to promote sustainable farming and coffee growing. A sustainable life in Honduras can never fund luxury Western lifestyle. Yet there and here we need to remember that the example of Abraham, who:

“By faith he lived as an alien in the land of promise, as in a foreign land, dwelling in tents with Isaac and Jacob, fellow heirs of the same promise; for he was looking for the city which has foundations, whose architect and builder is God” (Hebrews 11:9-10).

The Epistle to the Hebrews speaks of others as well, “strangers and aliens” in whose company we include ourselves by faith.

“All these died in faith, without receiving the promises, but having seen them and having welcomed them from a distance, and having confessed that they were strangers and exiles on the earth” (Hb 11:13).

Every day here at our home beside the Skagit River in Washington State we grind our freshly-roasted Honduran coffee and make delicious lattes, reading the Scriptures and seeking to discern the way forward. It is difficult to find better tasting coffee this side of heaven than what comes from Tierra Nueva’s farm—even in nearby Seattle, one of the world’s coffee meccas. We invite you to taste and see for yourself, and let us know what you think!

You can order Tierra Nueva farm blend, and even set up a regular subscription here. Help us increase our sales, which helps support Tierra Nueva’s ministry in Honduras. Please spread the word—which we’re sure you naturally will, once you start drinking this outstanding coffee.

Check out my podcast: “Disciple: Word, Spirit, Justice, Witness.” Sign up at Spotify or Apple Podcast