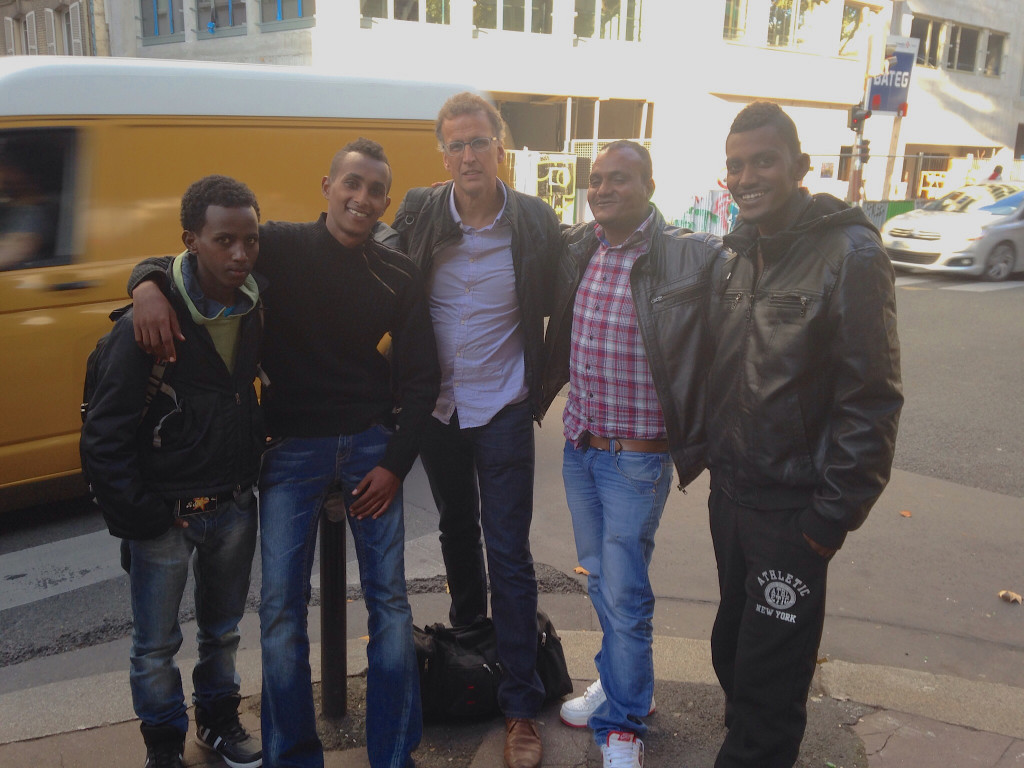 Last week while on the Isle of Jersey I had intended to take the ferry with an English friend to St. Malo, France and drive up the coast of Normandy to Calais, where we planned to visit refugees seeking entrance into the UK who were living in a tent city called the “jungle.”

I have been especially moved of late by the situation of Eritrean refugees, but also others from Somalia, Ethiopia, Syria and Iraq who fleeing oppressive regimes and war. I had read about the desperation of people seeking entrance illegally into the UK through the tunnels under the English Channel, and had some contacts with Eritrean Christians there.

However on the eve of our journey the way was blocked by stormy seas, and my friend’s inability to get away, leading me back to London and on the Paris via train. Little did I know that God would open a door to ministry to Eritreans and other East Africans in a completely unexpected way that would include a growing team of eager collaborator disciples.

Ismahan is a 30-year-old woman from Somalia who I first met at Tierra Nueva four years ago. Since she was heading back to Paris we connected her to a church we are closely linked to there. She attended a conference I spoke at September 19. After the training ended late that afternoon I asked her if she knew any refugees from Eritrea and Ethiopia. She told me that she could take right then to the metro stop Chapel where we could look for East African refugees who gather there en route to Calais.

Off we went on the metro. While traveling, Ismahan told me about her 15-year-old brother who was kidnapped and was being held for ransom by Islamists while on the perilous journey from Ethiopia to Libya, where he planned to catch a smugglers boat across the Mediterranean to Italy and on to France. She needed to locate someone who knew how to get money to her brother’s captors, but felt unsafe going as a woman alone. She was glad I was available and interested in going with her.

When we arrived by metro to the Chapel stop, we headed off along sidewalks crowded with African immigrants, and Ismahan began speaking to random people in Somali or Ethiopian, asking where there were Eritreans or other migrants who might be able to help her. An Ethiopian man offered to help us, leading us past a small park to an underpass where suddenly we were face-to-face with four young we learned were from Eritrea.

They told us they arrived that day from Italy en route to Calais and hopefully London (first photo above). They said they’d crossed over the Mediterranean in a smugglers boat four days before and were headed to Calais the next morning.

We asked them if they were by any chance Christians, and learned that two were Christians and two Muslims. We learned that the youngest one, a fifteen-year-old Muslim boy (far left of photo) was coughing up blood. We offered to pray for his healing, and also to help him find medical assistance and a hotel where they could rest. The young men looked exhausted and desperate, and were glad to receive prayer.

As we began to pray a small group of Somali migrants came around us and began to question us. “What are you doing?” “Who are you?” “Why are you here?” Ismahan warned me that they were all Muslims and that we needed to be careful as the spiritual atmosphere was intensifying.

Ismahan explained to them that I worked with undocumented immigrants who come from Mexico into the USA, and that I am a pastor in a jail and prison. I shook each of their hands and tried to break through the wall of wariness. The men eventually dispersed leaving us with the four Eritreans and the Ethiopian man, who was taking a special interest in us.

As he sipped from a large can of beer he whispered to me in broken English “would you pray for me too. I am Christian.” I gladly prayed for him and then noticed that tossed his unfinished beer into a trash can.

At that point Ismahan’s 25-year-old brother Nasar called, and we found him in front of a money wiring service run by Somalis under the overpass. Together we helped the Eritreans with some money for a hotel, gave them some British Pounds for their trip to the UK, and praying a final blessing over them. The Ethiopian man then told us he could take us to where there were other Eritreans, and people who would know how to get money to free Ismahan and Nasar’s brother.

Nasar is clearly wired for outreach, visible in his special interest in the Eritreans and kindness towards the Ethiopian man. He moved comfortably between English, French, Samali and Arabic as we engaged with people from different nations. I knew from talking with Ismahan that Nasar considered himself Muslim and had been closed to Jesus. As we walked I found myself thinking that Nasar was afraid of Jesus.  This thought was so strong that I finally risked a gentle challenge: “You are afraid of Jesus, aren’t you?”

Nasar denied being afraid of Jesus but I pressed in with this impression, telling him that I thought he was afraid, but that Jesus wanted him to know he respects him. This got his attention, so I shared with him how I could see that he had a heart full of compassion for refugees and people who suffer, and that united with Jesus he would be able to help people much more. He agreed that he had a big heart for the poor and seemed moved by what I said. I asked him if I could pray for him and he agreed. We prayed together there in the street before heading off on our next mission.

The Ethiopian man was gesturing for us to follow him through the crowd and to the Metro. “I know where there are many Eritreans, and people who can help you,” he insisted. Off we went, our guide, Nasar and a new Somali friend of his slipping close behind Ismahan and I so they could pass through the ticket control doors to avoid buying tickets. We switched trains several times and after 20 minutes or so we arrived at Place des Fetes.  We followed our Ethiopian guide through streets and alleys until we entered an abandoned school building where 100 or so African and Romanian immigrants were gathered in clusters in an old play area.

“This is an unofficial refugee camp,” Ismahan told me. See photo below and French article here. “These are all squatters and this building is condemned,” she said.

Our Ethiopian guide led up some stairs, past big plastic bags full of used clothes that men were picking through. We entered a hallway and Ismahan knocked on one of the doors. A woman opened it a crack and motioned for us to go. Dread was visible in her eyes, and Ismahan apologized and later told me that this woman had likely been raped, and was feeling threatened in this mostly male environment.

We passed open doors that revealed lines of men laid out side-by-side like sardines, small satchels with minimal belongings beside them. Are you from Eritrea? Ismahan asked in her language, translating for me. We entered room after room of migrants: Somalis from Mogadishu, Ethiopians, but no Eritreans. We moved through crowded hallways past men, some of whom looked like they could have once been pirates, soldiers or traffickers or simple laborers or peasants.

We turned past fresh graffiti and handprints, and through a doorway into a stairwell, which we ascended, up steps wet with urine. Pungent smells filled our nostrils as we climbed to the third floor, making our ways down hallways and into rooms full of Somalis and on to a room where we thought we’d find Eritreans.

“No we are all Afghans,” a man said as we peered into a large room full of side-by-side sleeping nests made of used clothing. In the hallways many men were squatting with ear buds firmly in place, speaking softly into their cell phones.

We made our way up another urine-soaked fight of stairs, through hallways to another door, our Ethiopian guide motioning for us to keep following.  This new Ethiopian friend’s spiritual thirst seemed to increase as our journey intensified. Numerous times he turned to me, pointed to his heart and said: “please pray for me.”

Finally we reached a room that he claimed had Eritreans inside. After a prolonged exchange at the door we were welcomed inside. A pregnant woman with three young children was sitting to the right, breastfeeding a baby. Three other women with children were before us along with a man. We learned that they were Muslims but were told that they wanted us to pray for them.

The man told me that they had left everything thinking that there was something better here. “But there is nothing here for us,” he said. Ismahan and I lifted our hands and prayed in English and in French for God’s peace over this household, favor and open doors for them in Jesus’ name.  I’m not sure whether what I prayed was translated, but the people were warming to us. I noticed one of the women continued to cough in a way that sounded like bronchitis.  I asked the man if she was his wife and he said she was. I prayed for her healing and she smiled.

We walked down the stairs to the ground floor and then back around to the front of the building, climbing the steps to the first floor and making our way a final time through halls full of desperate-looking men. I wasn’t sure what we were doing, maybe looking for someone who could help Ismahan and Nasar get money to their brother.

It was overwhelming to see these people, traumatized by their journeys from some many difficult places. What perils had they survived? What future awaits them? As we left a man followed us down the street. He told Ismahan and Nasar that this was the first time he had heard his language spoken in several weeks He said he was lonely and he wanted prayer. We all gathered around him and blessed him—a growing company attracted to Jesus’ mission of seeking and saving the lost.

Rather than finding Eritrean Christians in Calais, we found and prayed for Eritrean Muslims in Paris, en route to Calais. Instead of ministering together with my English friends, our growing team included Somalis, and an Ethiopian. Rather than feeling overwhelmed and paralyzed by the plight of these people I only knew through news articles, I feel moved and mobilized.

Now back home memories of these scenes haunt me, and I find myself praying for these people in these places of uncertainty and pain. They seem such obvious contemporaries of the crowds Jesus’ describes who “were distressed and helpless like sheep without a shepherd.” Jesus said to his disciples “the harvest is plentiful, but the workers are few. Therefore beg the Lord of the harvest to cast out workers into his harvest” (Matthew 9:36-38).

Please pray for migrants and refugees, for Ismahan, Nasar and our Ethiopian guide. Pray for freedom and safe travels for Ismahan and Nasar’s 16-year-old brother Aydarouss. The family is still short $1,000 in ransom fees. If you feel called to contribute something please contact me. 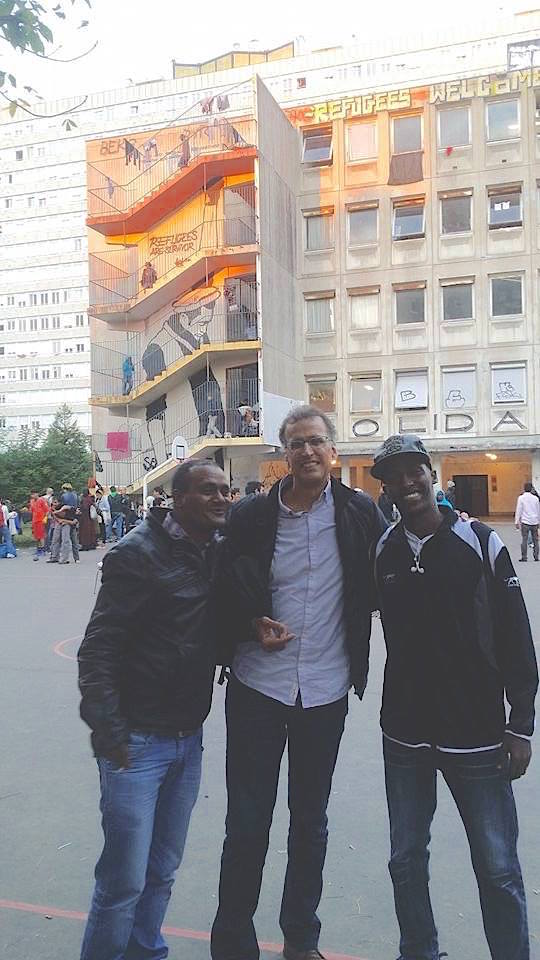 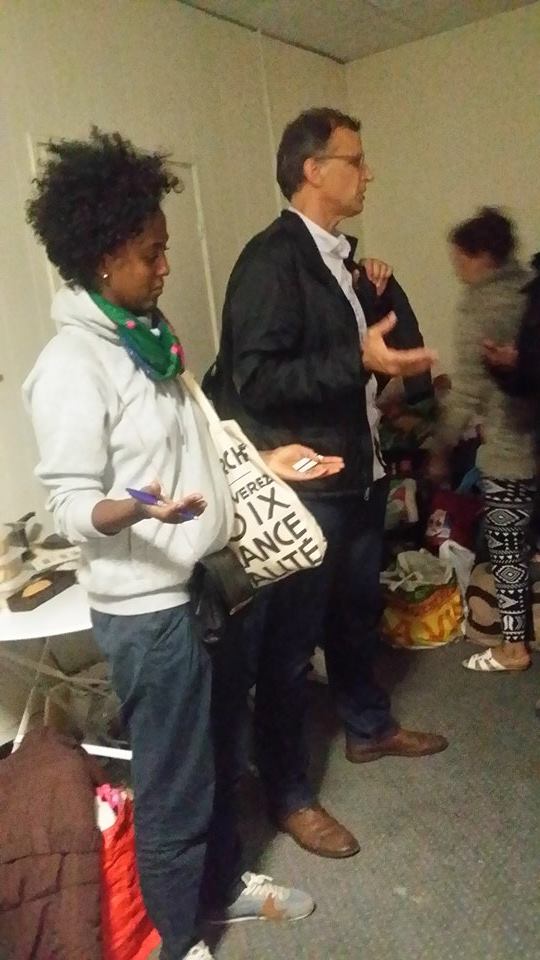