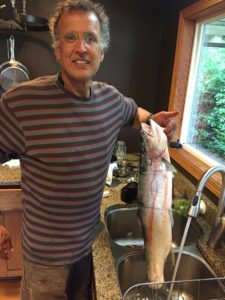 These past few days I have experienced surprising generosity and gratitude from the indigenous people of our land. After planting my garden beside the river below our house I drove the car I’d used to haul compost downriver along the dike, making the loop through our neighbor’s property and back to our house.

I noticed lots of trucks parked beside the Skagit River where the Swinomish tribe launch their fishing boats during their salmon fishing seasons. I decided to stop and see if I could make contact with one of the fishermen—something I’ve done many times over the years.

As I approached a man who was busily arranging his nets, he appeared to not see me, and headed off to his car. As a white guy, I’ve experienced a mixed reception when I’ve come around the launch: indifference, resentment– and also cautious friendliness. Friendliness to white people has cost natives their land, their culture, their very lives—so I tried to approach with sensitivity to the many reasons they’d have to distrust me. I occasionally run into someone there whom I’ve met in my jail Bible studies who recognizes me and greets me warmly. Other times people are in their cars getting high and don’t want to be bothered.

I approached an older man who was arranging things in his fishing boat.

“Yeah, it’s a Boston Whaler, it does the job,” he states, matter-of-factly.

“How’s the fishing? Are you fishing for Kings?” I ask.

“Yeah, we’re after Chinooks, the fishing’s ok, we’re getting a few,” he said.

Just then the other man I’d thought was ignoring me approached.

He motioned me over to his truck and opened a big blue plastic cooler.

The man I’d been talking to in the boat yelled over to him. “Are you selling it to him?”

“No, I’m giving it to him,” he said, as he carried the shiny steelhead by its gills, walking beside me to my car.

“May God bless your fishing!” I said, thanking him for his gift. “I hope we’ll have good luck,” he said.

Yesterday, we were invited to the Swinomish blessing of the salmon fleet by Sarah, a Native American woman who attends our Tierra Nueva church and lives on the reservation ten minutes from our house.

The event, which packed out the Swinomish youth gymnasium, began with a warm welcome, followed by a drumming ceremony and then a lavish meal of seafood: smoked Chinook salmon, shrimp, crab, mussels and clams. A man approached whom I’d met in the jail, who attended our church a few years back while he was going through drug court. He came to thank me for the support we’d given him, and to tell me he’d now been clean five years.

After the meal we joined the procession to the Swinomish channel, where the ceremony was explained by the tribal chairman. Guests were honored and prayers and blessings were offered by the Catholic priest, the Assembly of God missionary and the Shaker leaders. Salmon carcasses, clam and mussel shells atop cedar boughs were held ceremonially by young people, who offered them back to the river in thankfulness to the Creator.

Gracie and I left deeply moved by the hospitality of our Native American neighbors, who hosted us, grandchildren and great grandchildren of immigrants that we are—sharing the bounty they’d harvested from this land.

To listen to last Sunday’s sermon on venturing onto Isaiah 35’s Highway of Holiness, “Step by step with Jesus,” click here.

To support our ministry with Tierra Nueva, click here. 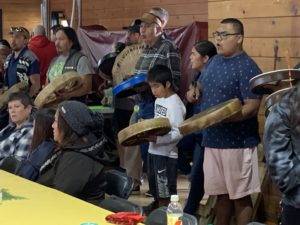 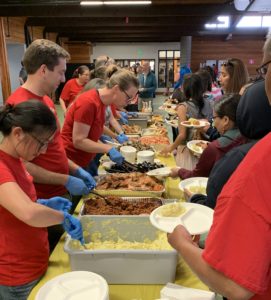 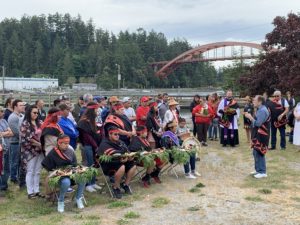