I have been seeing God at work in beautiful ways these days.  Two weeks ago we prayed for a 28-year-old French woman who had suffered for 20 years with pain from scoliosis (she had a 14% curvature of the spine).  She was surprised when she felt something move in the middle of her back as we commanded her spine to straighten in Jesus’ name.  And then the pain went away completely.  The next day her doctor told her that her spine was completely straight!  She even has x-rays to show the before and after.

Last week I traveled to Clermont-Ferrand in the center of France, 3 ½ hours South of Paris for some speaking and outreach.  The first day I went out with my pastor friend Jean-Paul Fritz and two people from his church for their weekly Thursday outreach to the homeless.  We walked through the city and whenever we came to a homeless person, Jean-Paul and his team pulled out a bag from their cart with a freshly-made sandwich and bottle of water, offering it to the person.  They knew nearly everyone by name from having done this for over a year, and everyone gratefully received and talked with us.

We asked each person if they wanted prayer for anything, and nearly everyone said yes.  We prayed for a number of people and ended up in a park on the outskirts of town that was full of homeless men and women with their dogs.  They were drinking beer and many were playing bocce ball.  I talked with a man in his early 30s named David who lives in his car, moving from place to place with other homeless people.  He said he didn’t believe in God, but was eager to talk about faith and life, and said he really appreciated the way we talked with him.  Jean-Paul is bringing him a Bible as he was open to read about Jesus, whom he did not know at all.

The next day I visited the city jail with Jean-Paul, one of the chaplains there.  I led a Bible study on Psalm 23 and Luke 15, focusing on Jesus as personal Shepherd-Advocate who cares for an d protects.  They were amused and seemed genuinely moved by the story of the Shepherd who leaves the 99 to seek and find the lost sheep, who was doing nothing worthy of being found and got carried home to a party in his honor.   The ten men who attended were mostly French.  They were humble and extremely open.

I don’t know why I decided at the very end to tell the story of a man whose hand was broken by the police when he was resisting arrest years ago in Mount Vernon.  I told how he cursed the police out loud throughout my jail Bible study, and how I sensed God urging me to offer to pray for him, to show him that Jesus had nothing at all to do with the police violence, but wanted to show he loved him.  I told how the man had accepted prayer in front of the other inmates, and how I asked Jesus to undo the damage done by the police, and learned the next day while visiting someone else that his hand was healed overnight.

A French inmate who had fought in Bosnia and Iraq came up afterwards.  He told me that the police had broken his hand that year when they arrested him.  He asked me if I could pray for Jesus to undo what the police had done.   He showed me a long, swollen scar that extended 6-8 inches up his wrist.  I prayed several prayers, asking him each time if he felt anything changing.   But there was no letup in the pain.  I then asked him if he had forgiven the flic (police officer).  He hadn’t, but was totally willing to and repeated a prayer after me, forgiving the officer for breaking his wrist with a baton.   We prayed, asking God’s Kingdom to come right then and there in his wrist as in heaven, then I asked him if he noticed any improvement.  He said he felt heat all over the scar and could no longer feel any pain.  That afternoon we saw another inmate healed of pain in his middle back.  Jean-Paul is seeing God confirm his teaching and one-on-one visits with inmates with signs of healing and other answers to prayer.

The last few days I’ve been going to the Louvre (art museum) with Luke.  I sometimes go when I’m feeling spiritually hungry, hoping to be fed by contemplating some of the amazing Christian art.  Yesterday I was moved by Lotto’s Jesus advocating for the adulterous woman (first below),  and Jesus’ healing the blind man of Jericho by Poussin (second below), and by Lorenzo’s depiction of Jesus carrying the cross (third below)

May you experience more of Christ’s Kingdom, on earth as in heaven as you step into your inheritance as a beloved one. 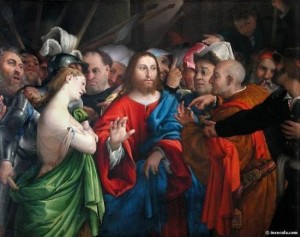 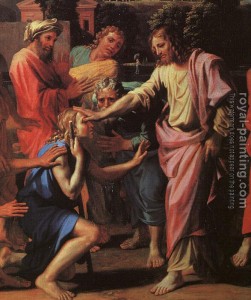