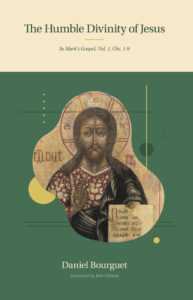 I’m delighted to announce the publication of the English translation of the first volume of our French mentor and friend, Daniel Bourguet’s excellent little book on Jesus in Mark’s Gospel. These inspired meditations model contemplative reading of Scripture that truly feeds our spirits, leading us to read the Bible freshly. Please enjoy and excerpt below and you’ll want to get a copy of this book here.

The Multiplication of the loaves

We always speak of the “multiplication of loaves,” but these terms come from modern editors and not from Mark himself. Where are the terms “multiplication” or “multiply”? Nowhere. Mark uses neither term nor their synonyms. The same applies to the parallel accounts in Matthew, Luke and even John: none of them talk about multiplication more in the account of the first multiplication than in the second! This is really amazing. Nevertheless, multiplication is what happened: we have only to look at the outcome — baskets full of leftovers, when to begin there were only a few loaves and thousands of seated people! What exactly does Mark say about this multiplication, which must surely be signaled somewhere in the account?

The verb paratithémi, often translated as “distribute,” more precisely means “offer” or “present,” but not “multiply.” The disciples offered the crowd broken, not multiplied, loaves, as with the fish. Whether the word is translated as “distribute” or “offer,” one can but realize that the loaves were indeed multiplied if they fed such a great crowd, and multiplied to such an extent that there were basketfuls of leftovers. But when exactly were they multiplied?

It’s evident from the passage that the miracle took place between the four actions of Jesus recorded by Mark (take, bless, break, give) and the distribution by the disciples. It took place in a gap in the text, in the inexpressible, because Mark has no words to describe or formulate what happened. When Mark says that Jesus broke the loaves, this doesn’t mean that he multiplied them. The miracle belongs to a place beyond words. The verb “multiply” does exist in Hebrew (râvav) as in Greek (plèthunô), as we see in a verse from the psalms: “Our flocks multiply by their thousands, by tens of thousands” (Ps 144:13); so it seems to me that if Mark is unable to find human words to speak of such a miracle it’s because it has to do not with us but with God. It was a divine work, a work which is beyond anything we are able to say. The miracle invites us to contemplate the inexpressible work of God.

But who actually performed the miracle? The account places the miracle between Jesus handing out the broken bread and the distribution by the disciples, in a moment beyond our grasp. I have a problem saying that the disciples performed the miracle. Mark invites us to believe that it was Jesus who did it. If this miracle was divine and beyond expression, and if it was indeed Jesus who performed what is a divine work, this discreetly once again reveals that Jesus is God.

It also seems right to add that the miracle accomplished by Jesus took place with such humility that it didn’t become apparent in the hands of Jesus but in the hands of the disciples when they offered and distributed the bread to the crowd. I believe that it was only when they began to distribute the bread that they realized that the loaves had been multiplied or were multiplying as the distribution proceeded…

Jesus is so humble that he steps back to let the miracle appear in the disciples’ hands, not his. In a way, Jesus associated the disciples with the miracle in order to efface himself behind them. What humility!

This humility of Christ is found in other miracles, as in the healing of the man born blind (Jn 9:6–7): when Jesus smeared the blind man’s eyes with mud and sent him to wash, the miracle was not yet apparent. The blind man became aware of it after he had washed his eyes. He came back to Jesus, who had disappeared; he “self-eclipsed” in the most complete humility.

When Jesus sent the Syro-Phoenician woman home, no one could possibly have known about her daughter’s healing. Only when she got home, far from Jesus, did she discover the miracle (7:30). Here again, Jesus’ humility is revealed. It’s an overwhelming humility that surpasses any other!

In the other account of multiplication of loaves, exactly the same takes place: “After Jesus had taken the seven loaves, and after giving thanks, he broke them and gave them to his disciples to present them to the crowd” (8:6). Once more, Jesus effaces himself and entrusts the miracle to the disciples; again, the miracle no doubt became apparent not before, but during the distribution….

This self-effacement of Jesus is truly wonderful. That Jesus should do this is nothing new to us; in the account of the paralytic, we have also seen Jesus step back behind his Father to enable us to contemplate the Father in synergy 15. Translating the French literally. The multiplication of loaves (Mark 6:30–44) with him. New here is that Jesus doesn’t include the Father but does include the disciples, as though he was inviting them to participate in the miracle in synergy with him, honoring them to the highest degree, especially when we find in the continuation that the disciples had not understood the miracle at all! Even when drawn into the second multiplication of loaves, the disciples still failed to understand what Jesus had done in conjunction with them or through them. The humble Jesus effaces himself behind disciples who don’t understand. It’s shocking. The truth is that we do no better today: how often is the Lord at work through us, even at times working miracles through us, and we don’t understand what he is doing! Lord Jesus, have pity on us!

Purchase your copy of this book here.