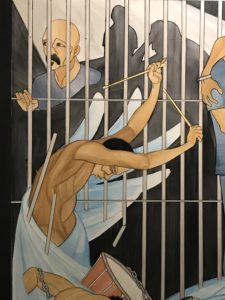 This past Thursday evening in the jail I was struck by the high level of both human suffering and openness. In one pod where everyone was in lockdown the correctional officer allowed men in the upper tiers who were interested in a Bible study to come out and meet with me.

As we talked I learned that most of the seven men were the ages of our children—28, 26 and 24. The youngest man was 22 and oldest was 34 followed by 31. I talk about the blind man’s cry at the entrance of Jericho: “Jesus, son of David, have mercy on me!”

The men look weary, but soak up my encouragement to cry out to Jesus like the blind man, and dare to believe that he will stop and listen to them.

I ask the men what they would say if Jesus asked them: “what do you want me to do for you?”

They say things like: “keep off of drugs,” “success in my court,” and “help for my family.” One particularly soft-spoken man says he can’t imagine asking Jesus for anything for himself as he feels so unworthy. Another man says he wants to believe but finds it really hard to have any faith. As I pray for the guys I want to hear each of their stories. But the entire lower level of cells is full of men needing attention.

The lower level of this cell block is made of gang-involved men, most of whom I know. I spend the next 30 minutes going from cell to cell, talking and praying with guys through the cracks in their cell door.

A number of the men were alone in a cell with four bunks. I was struck by the barrenness of their setting and their loneliness and vulnerability. I slip a copy of my new book, Guerrilla Bible Studies: Surprising Encounters with God, under one man’s cell door. He asks me if Gracie can visit his partner in the woman’s pod, who was just sentenced to 18 months in prison. We pray for her and the six kids she’s leaving behind.

In cells were there are several inmates, the men gather around the crack in the door and share their sorrowful requests. I pray the men’s requests, and for the Holy Spirit to fill their cells, and bring them comfort. Three of the cells had only Spanish-speaking men, whose faces seem marked by deprivation. They are particularly humble and moved to tears to be ministered to in Spanish.

I leave the pod around 9:30pm, feeling jet lagged after having returned earlier in the week from three weeks in Beirut, France and Belfast. “Should I visit the mental health pod?” I wonder. I think of one young man I know who had been healed last year of paralysis and pain from a crippling gunshot wound. I missed seeing him and thought he might be in the next pod, and decide to go see.

The moment I enter the pod I am greeted by Isaac, who says loudly: “whoa that’s crazy Bob, I was just telling my cousin about you, and he’s really open to God.”

He introduces me to his second cousin, who has a large 2 tattooed on each cheek. Five or six young men gather around a table with me and we talk. I ask about the meaning of 22, and am told it was 22nd street, where it appeared most of these men normally lived.

Isaac was coughing like he had the last time I’d seen him, and I ask him about it. “Oh it’s nothing, it goes away,” he said, brushing it off. I ask him if it was related to his gunshot wound, and he said that the bullet had in fact penetrated his lungs. I suggest that we pray for him before the night was over, and he says that’d be cool. Then a young gang-involved man with facial tattoos named Chris pulls up his pant leg and shows me a wound that was starting to scab over:

“The police sicked their service dog on me,” he said. “When they took me to the ER (emergency room) the nurse asked if I was in pain. I told her my whole life is in pain!” He reminds me that we’d talked for over an hour a few months back when we’d run into each other in the train station parking lot, saying that this conversation had meant a lot to him.

A young man beside him said a police dog had bit into his scalp, but that all the pain had gone away after he’d received prayer.

At this point I was so moved that I stood up and asked if I could just go around and pray for each of the men. They agree and I go around, putting a hand on each man and blessing them, praying whatever came out on their behalf—for healing, comfort, success in their court, and the love of God to find them…

I sit back down and asked Isaac’s cousin about the special meaning for him of the 22 he’d tattooed on cheeks.

Isaac, who himself has 22 tattooed over his left eyebrow, explains that 22 helps them remember Fabian, a young man who died after shooting himself accidentally in the head back in 2012. Isaac pulls up his shirt and shows me how he has his friend’s name and the date of his death tattooed in cursive script on his back. Each of these men, all under 26, talked with fondness and sorrow about their fallen friend. I noted their sadness and said that it was important they know that Jesus shares their grief and sees and knows their pain.

At this point they began mentioning others who had died, at first using their gang names (Random, Little Mister, Trickster, Locs, Creepy, Midget…). But when I ask if I could write down the details to commemorate them, they give their friends’ actual names. They mention by name twelve young men, who had died of drive-by shootings, heroine overdoses, car accidents, a heart attack, and from being shot in the face.

Naming their fallen friends and me writing them down seems to bring some noticeable comfort, even as the reality of these tragic deaths left me deeply grieved by the weight of sorrow that afflicts these young men, warehoused in our jails and prisons.

I think of how God heard the cries of his people enslaved in Egypt and I’m so glad this is the Father we worship. I feel a special closeness as I read Exodus 2:23-25.

I find comfort in many of the Psalms that tell of God’s heart for prisoners.

“For the Lord hears the needy and does not despise his who are prisoners” (Ps 69:33).

I pray Psalm 79:11 now as I think of them:  “Let the groaning of the prisoner come before you; according to the greatness of your power preserve those who are doomed to die.”

I wonder again what it means that the Spirit of the Lord came upon Jesus and comes upon us to bring freedom to the prisoners, and liberation to those who are oppressed (Luke 4:18).