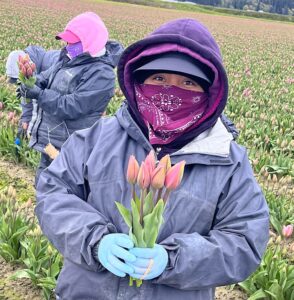 This week I’ve been struck by the Gospel of Luke’s description of Jesus’ humble entry into Jerusalem. Though he is Israel’s Messiah and the world’s Savior, no delegation from Jerusalem comes out to meet Jesus as he approaches the earthly capital of the spiritual universe.

Like a renegade guerrilla commander Jesus sends his disciples with instructions about how to secure his transport from a sympathizer:

“Go into the village ahead of you; there, as you enter, you will find a colt tied on which no one yet has ever sat; untie it and bring it here. “If anyone asks you, ‘Why are you untying it?’ you shall say, ‘The Lord has need of it.’”

“The whole crowd of the disciples” are then described as “praising God joyfully with a loud voice for all the miracles which they had seen.”

As I read this story with a group of farmworkers at Tierra Nueva’s Sunday service I ask them to recall any recent miracles attributed to Jesus for which we can praise God.

Marcelino, who was dying on a respirator last summer, was instantly healed when we prayed for him over the phone. Octavia no longer has bad headaches. Tomas is experiencing relief from insomnia. Other answers to prayer are mentioned, including a victory in a recent confrontation with employers over wages.

We read on how the crowd of disciples were shouting.

“Have any of you ever shouted recently?” I ask, remembering they’d told me about their protest for fair recompense at the headquarters of a Skagit Valley flower-growing operation.

What were the disciples shouting? I ask, inviting someone to read Luke 19:38.

“Blessed is the King who comes in the name of the Lord! Peace in heaven and glory in the highest!”

We note that though the authorities in Jerusalem are absent (and silent), the disciples of Jesus shout joyfully and loudly.

What that would look like to proclaim Jesus loudly and publicly today? Certainly people are similarly unaware and unimpressed by Jesus now, it seems.

“How do the religious leaders react to the disciple’s worship?” I ask, inviting someone to read the next verse.

The Pharisees try to silence any special attention given to Jesus that day, though he is the King of the universe, God’s beloved Son, come to save the world.

“Have you ever experienced being ignored or silenced?” I ask.

The people describe how at their first protest against unfair wages, one of the heads of the company told them to leave the property or he’d call the Sheriff. These workers had been working 6-7 days a week, 8-10 hours daily in cold, rainy weather to prepare for the tulip festival. This really discouraged them.

I have watched the silent suffering of immigrant workers continually scapegoated by politicians and the public. Calls to expel undocumented immigrants, to build a wall along the US-Mexican border, and the refusal of the powerful to promote real immigration reform harm people’s self-esteem and push them underground.

“Let’s see how Jesus responds to the Pharisees’ distain,” I suggest, inviting someone to read Luke 19:40.

“What would it look like if the tulips cried out in your favor?” I ask.

“What if they all cried out from the fields: “Si se puede! Si se puede!?”

People look up with big smiles, delighted as we all imagine the tulips shouting out.

Thankfully the President of the company met with his workers and resolved the labor dispute the day after the standoff. This week the festival is underway, drawing thousands of tourists to our valley.

Let’s not remain silent in this time when injustices are covered over. Let’s not bow to pressures to minimize Jesus.

Disciples of Jesus must certainly not remain silent in the face of intimidation. And yet the rejection of Jesus by the powers goes from bad to worse: arrest, torture and the brutal death penalty by crucifixion.

God’s humble descent into the fields, prisons and war zones of our broken world moves me deeply. From that suffering the resurrection breaks out, inaugurating a movement that will eventually overturn the established orders for ever, when Jesus, the King is enthroned.