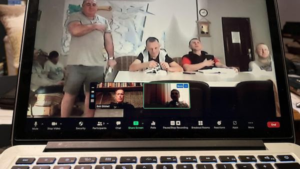 On Tuesday nights from 10:00-11:00pm I’ve been leading a Bible study to a group of Russian men in a recovery house near Krasnodar in Southwest Russia near the Black Sea—a four-hour drive from the Ukrainian border. It’s 8:00am Wednesday morning there.

The men gather around a big screen TV in their living room. I can’t see all of them as their camera isn’t wide angle enough to take them all in. This particular evening I made an effort to include a good friend named Larry, a Native American man in his early 50s who lives up-river from us in a remote town.

Larry has spent many years in prison and is currently out of jail on bail. I had told the Russian recovery guys about him, and they wanted to meet him. He too was excited to meet them. He’s never used Zoom, so I had to help him download it and get connected an hour or so before.

Larry and I were together in the Zoom meeting room right before the Russians came online. Larry was visible seated comfortably in his living room by his wood burning stove, a big smile on his face and his Russian fur hat on his head.

The Russians came online just as I noticed a Facebook Messenger message telling me that my Russian interpreter was in Moscow with a friend and couldn’t help us. Oh no! How were we going to make this study work?

I immediately navigated with my phone and typed into Google Translate what I wanted to say, and tapped the speaker button. A syrupy but robotic female Russian voice spoke it out, as I pressed my phone against my computer’s microphone.

“Hello everyone. Can someone read John 10:1?” stammered the pathetic-sounding Google voice.

The Russian men seemed unfazed, searching and finding the text in their Bibles. Larry read it in English and one of them read it in Russian.

“Truly, truly, I say to you, he who does not enter by the door into the fold of the sheep, but climbs up some other way, he is a thief and a robber.”

I awkwardly typed my next question into Google Translate on my phone. Larry found this amusing, while the Russian men patiently looked on. I could see that this was going to be too slow to work, but I didn’t want to give up. Who did I know who could translate?

“Ilya, I’m on a Zoom call with some Russian recovery guys right now, but my interpreter isn’t available. Can you help us?” I pleaded.

Ilya told me he’d never interpreted and never used Zoom, but he was willing to give it a try. I sent him the Zoom link to download and within minutes he appeared in our Zoom call.

“So, let’s see what Jesus tells us in John 10:1 about someone entering the sheep pen in a way other than the door,” I say, inviting someone to re-read this verse. Ilya spoke out what I’d said in Russian, and one of the Russians read:

“Truly, truly, I say to you, he who does not enter by the door into the fold of the sheep, but climbs up some other way, he is a thief and a robber.”

Have any of you ever had someone come into your house in any way other than through the front door? Or do you know of anyone who has broken into a house?” I ask, suspecting they had some direct experience.

All of these men, including Larry, had been drug addicts. Most had also spent time in prison. The men immediately responded, and Ilya interpreted back to us:

“All of us have done this. We’ve been the robbers, entering homes in ways other than through the front door.”

The men began to laugh at themselves for their spontaneous, frank admissions. Larry was nodding and laughing too, saying he’d been involved in home invasions (of drug houses). They seemed humored and even amazed by how the Bible had so directly highlighted criminal behavior they’d engaged in.

I share how Jesus’ reference to the thief entering the sheep fold here is likely referring to predatory powers that seek to steel away God’s people.

“What might some of these predatory, thieving forces be today? I ask.

“So, let’s check out the alternative Jesus describes in the next verses,” I suggest, inviting someone to read John 10:2-3.

“But he who enters by the door is a shepherd of the sheep. To him the doorkeeper opens, and the sheep hear his voice, and he calls his own sheep by name and leads them out.”

“In contrast to the thief, how does the shepherd of the sheep enter the sheep pen?” I ask.

The men all notice that the shepherd, referring to Jesus, enters by the front door.

I ask the men how that strikes them, and what that tells us about Jesus.

They share that Jesus doesn’t sneak in, climb in another way, or force his way in. It’s obvious too that he most certainly doesn’t invade. But I don’t mention this. Jesus comes to the door, where he can present himself be clearly seen and heard for who he is- the Good Shepherd. The doorkeeper inside can open and let him in– or choose to not let him enter.

We talk about how this text presents a Jesus not out to coerce or in any way dominate. His voice can be heard—and the sheep hear him, knowing he’s present. He also takes the initiative, calling sheep that are identified as “his own.” He calls them by their names, which means he knows their names. He doesn’t keep them confined but leads them out.

“The thief comes to rob, kills and destroy,” adds Jesus in John 10:10. “I came that you might have life, and have it abundantly.”

The men find this picture of the respectful, intimate, life-giving, shepherd Jesus comforting. They say they would gladly welcome him in and follow him out. I invite Larry to share his story, and he briefly tells the Russian guys how he came to recognize and welcome Jesus as his shepherd Savior. The men listen attentively as Ilya interprets.

We wrap up our time together speaking out to Jesus how we are drawn to him as our shepherd. There’s a tenderness and delight, and Ilya is visibly moved.

I am amazed at how our very experience on Zoom that night illustrated Jesus’ parable. The Russian recovery guys receive me, since they already know me. They also received Larry, since he’s my friend. Ilya’s appearance is also part of Jesus’ coming to the door of our Zoom sheep pen. He speaks our Russian sheep’s language, making communication and intimate fellowship possible.

There, to the South of a violent, forceful invasion in neighboring Ukraine, the kingdom of God was being respectfully offered by Jesus “at the door,” and welcomed– and we were all feeling invited to follow him into freedom.

I highly recommend our new webinar starting March 28th “Discerning the Times: Global Awareness + Actions for Peace” (GW12) . This webinar will be taught by my good friend Jonathan Frerichs, who currently lives near Geneva in France.

Jonathan is a close friend who I have known for many years. He has a broad and deep understanding of world that’s come from years of study, direct on-the-ground engagement, and active peacemaking. Learn more and register below.