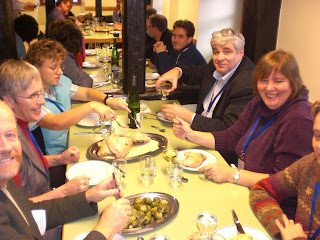 I am seeing increasing signs of the coming together of currents in the body of Christ that are often divided. Those committed to meeting God through thoughtful study of Scripture are cross-pollinating with contemplatives and Holy Spirit-focused charismatic Christians in a powerful confluence that is gradually reversing Jesus’ reproach to the Saddusees: “You do not understand the Scriptures or the power of God” (Matt 22:29). This reversal is desperately needed today, as people need the message and preaching of Jesus Christ to be “demonstrated by the Spirit and power of God” (1 Cor 2:4).

On Thanksgiving Day I flew home from Paris after a rich 10 days of teaching and ministry in France. The first five days were in Alsace at Scripture Union’s French retreat center Rimlishof. There, Tierra Nueva intern Troy Terpstra and I met with some 50 Scripture Union workers from 22 European countries for five days of presentations and conversations. Most of the people had read my book, Reading the Bible with the Damned in preparation for discussions on how to effectively engage people in liberating reading of the Bible.

People from different European countries presented their research on many topics related to Bible engagement. Andrey Cherniak of Scripture Union Russia spoke on Lectio Divina and then led an optional contemplative reading of a Bible passage that many attended. David Pritchard from Madrid sat us all down like children to show us how to engage little kids in an approach called “godly play.” He told us the story of Abram and Sarai’s journey of faith and then had us respond with colored paper, pens, crayons or however we felt led. Others spoke on how to effectively engage grade school children, teen agers, traditional church goers or secularized European adults in transformational Bible study. Others presented their expertise on websites, interactive electronic gaming systems and contextually sensitive publications of various sorts. I was inspired and amazed by people diverse approaches and giftings.

Every morning I led a Bible study to demonstrate ways of reading the Bible that I’ve found effective both in the jail and among mainstream Christians. People responded enthusiastically to these Bible studies and bibliodramas. I shared about my growing desire to be continually filled with and led by the Holy Spirit and the anointing in my reading of the Bible and in my ministry—rather than depending upon my education, experience and natural abilities. Jesus himself emphasized this when he said: “The Spirit of the Lord is upon me and he has anointed me to preach the good news to the poor.” If Jesus himself needs the Spirit upon him and the anointing “today” and every day, we too need God’s continual Presence upon, in and before us in everything we do. People seemed inspired to seek more of this anointing that John talks about, the chrisma that abides in us and teaches us about all things (1 John 2:20, 27).

People were interested in talking further about this vast theme of Word and Spirit. I witnessed people’s spiritual hunger firsthand when some 25 came to an optional soaking prayer time one evening. God’s Spirit came very beautifully, bringing comfort, encouragement and healing.

I was excited to learn that these leaders together will be training some 10,000 Bible study facilitators in the months before summer to work with children, youth and adults throughout Europe. Let’s keep these many Scripture Union workers in our prayers: that the Spirit would guide them in their announcing of good news to hungry people throughout post-Christendom Europe (see www.su-international.org). I will write again in a few days about my time in Paris.

New Earth Refuge’s construction project is moving forward daily. Gracie and I are thankful to God and our supporters for the nearly $50,000 that has been given since August. We have now completed all the framing, the roofing and are just now installing the doors and windows. We are confident that gifts will continue to come in so we can complete the electrical, plumbing, insulation and interior finish.

We are especially encouraged that our ministry here at New Earth Refuge at our existing guest house has been growing. Groups, individuals and couples are coming here more and more to receive prayer from Gracie, me and others at Tierra Nueva. People are experiencing healing and renewal, as you can read in the testimonial from Laurie below.

“In June I returned from riding a friend’s horse. It was a vigorous ride to say the least and the next morning I woke with terrible low back pain. As the days passed instead of getting better the pain grew worse. It spread from my lower back up to my neck and shoulders leaving me unable to drive or do daily household chores.

Despite seeing doctors and physical therapists over the following weeks the pain did not go away. The summer passed as I sat in the chair feeling hopeless. With two children, one autistic, and a marriage that was all but over I could not imagine why God would allow this to happen.

A few short minutes later a friend arrived at the house. I told her of the events of the morning and she mentioned that she knew of someone who would pray for my back pain. I wrote his name down but I wasn’t sure how I felt about “healing prayer”. My skeptical side just does not want to believe it, for several reasons I suppose. I certainly do not want to look like a sucker and what am I supposed to do with my faith if for some reason they pray for me and my back does not feel better.

Later, another friend dropped by and I was shocked to hear her tell me that she also knew of someone I should see who would pray for my back pain, Bob Ekblad, the very name I had just written down. Despite my skepticism and discomfort this seemed more than a coincidence to me.

I tried to schedule a time to see Bob but somehow no time seemed to work so he offered to pray for me over the phone. During this prayer time Bob mentioned that I may have some people in my life I need to forgive and encouraged me to ask God to bring those people to mind. Over the next several days names and events came to mind like waves on the beach and I spent a lot of time dealing with forgiveness. My back pain, however was still there and discouragement was setting in. What I wasn’t thinking about was healing was taking place in my life just not in my back yet.

Finally my husband and I were able to schedule some time with Bob at his home. We arrived and were introduced to a woman by the name of Amy who was also there to pray with us. After brief introductions Bob and Amy placed their hands on me and began to pray. At first I was afraid this would not change anything. Then my back and neck began to feel hot and cold at the same time….like BenGay. Amy mentioned some impressions that she was receiving that were so accurate I was overwhelmed. How could she know that? Bob mentioned to me then that he had a strong impression I had been given a gift of evangelism. The association I had with that word made me very uncomfortable at first until Bob explained to me what evangelism really meant– sharing naturally the stories of God’s work in my own life first. The pain in my neck and shoulders was gone.

Bob turned to my husband and asked whether he had pain in his left shoulder. This really surprised him as my husband had been suffering from pain in his left shoulder for years, as well as his right knee, but had said nothing about this to Bob. Before praying for him Bob expressed to my husband that he felt very strongly that my husband had a prophetic gifting, that he was sensitive to hearing God’s voice. Like me, my husband was resistant to this until Bob explained to him that it was more like your own thoughts then a “booming God voice”. Then Bob began to pray. Again Amy mentioned the impressions she had and again she was so accurate. Bob asked my husband how he felt and the pain was no longer there.