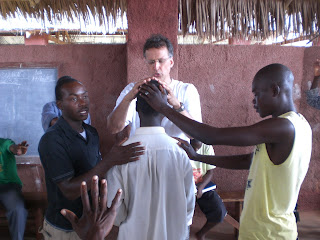 My 13-year-old daughter Anna and I just returned from a three-week trip to Paris (5 days), Pietermaritzburg, South Africa (3 days) and Pemba, Mozambique (the rest). In each of these distinct places we heard the groans, saw the longing in people’s faces for more meaning and transformation, and witnessed God’s Kingdom breaking in.

Paris is a city of great sensual appeal. Fashion, the arts and aesthetic beauty are ever alluring. Tastes and scents invite participation. The streets are filled with the young, the beautiful, the unique and altogether interesting. Yet in the face of all the cultural bounty I was struck by a pervasive loneliness, emptiness and entrapment. I met a young American super model in the metro who was taking home $2,000 a day. She told me the four months she’d been there were the hardest in her life. She was beautiful, successful but lonely to the point of despair. “Vanity, vanity, all is vanity and striving after the wind” was apparent in Paris.

Yet in the Eglise Reformée de Belleville where I ministered I saw people reaching out for connections deeper than any culture can offer. There in the heart of Paris’ Jewish and North African communities people come together to worship, read the Scriptures, hear the Word preached and eat together. I saw people longing for authentic community that’s not easy to come by in the hustle of urban Europe. The leadership is challenged to facilitate community in the face of emptiness. Immigrant youth are being served by an after school program. People streamed forward to receive prayer, healing and deliverance all afternoon.

Next stop was Pietermaritzburg, South Africa where we were hosted by good friends and Univ of Kwazulu-Natal professors Gerald and Bev West and Jonathan Draper. These people are veteran activists, pastors and teachers who train up theologians for all of Africa. The Aids epidemic, post-apartheid affirmative action policies, rampant violence and poverty and social chaos both at home in S. Africa and in surrounding nations like Zimbabwe have brought the Doctors of the Word down low. I was impressed by the humility of 8-10 Bible profs Anna and I met with one night for dinner and discussion. I was struck by honest grappling over ideas that matter both that night and the next day at a “theological café” where I presented my new book to profs and grad students at the University. Where is the Gospel that has the power to save? These people are hearing it, being held up by Jesus and are still in the struggle, but with no easy answers or quick fix-all plans. They seem to realize with Jesus that “these can only be cast out by prayer and fasting.”

Final stop Pemba and then Maputo, Mozambique. Iris Ministry is still in the midst of amazing growth with as many as 9,000 churches?!—900 of them in the last four or five years in a part of the country thought to be impenetrable because of an exotic mix of traditional African religion and Islam.

We did a village outreach where several thousand showed up, and it wasn’t easy. Some people came up for prayer to mock those ministering. They pretended to be sick and then sprung up and pranced off “miraculously healed” before laughing friends. Many of the visiting Canadian ministry team caught people trying to steal their cameras off their bodies. Yet truly hurting people approached us too, humbly asking for prayer.

We saw Jesus heal lots of people of all kinds of ailments. I witnessed someone get their sight restored and a deaf mute child say “mama” for the first time to his mother who was overcome with joy. We returned to the vehicle to find that Heidi Baker’s and my back packs had been pulled through a broken window in the land rover. That night the regional pastors recovered our journals, book bags and other odds and ends—but Heidi’s expensive phones, cameras and $2500 cash and our camcorder and MP3 player were lost.

A few days later Anna joined me as I preached in pastor Juma’s home church in an impoverished village in the countryside outside Pemba. Pastor Juma is an Iris pastor who has started some 30 churches in the 6-7 years he’s been a pastor. Children, youth and adults pounded the sloping dirt floor of the church with their bare feet, dancing to wild drumming that accompanied simple choruses led by one song leader after another. After a good hour and half of exuberant worship I preached on ordinary believers’ authority and empowerment for Jesus’ ministry and had people lay hands on themselves for healing. A good thirty people were healed on the spot and we invited those still suffering to come forward for more prayer. 20-30 people came forward and we watched nearly everyone experience relief as Anna, pastor Juma and our two American Iris worker friends laid hands on people. This community had experienced numerous miracles of multiplication of food. They seemed to embody Jesus’ beatitude: “blessed are those who hunger and thirst for righteousness, for they shall be filled.”

Back at the Iris base I alternated between teaching 120 or so mission students from around the world and 110 Mozambican Bible school students. On both teaching fronts people were hungry and open. The Westerns were feeling their limits. They worshipped from the heart and responded to my invitations and the Holy Spirit came every time. Heidi asked me to help her pray for the Mozambican pastor candidates to be filled with the Holy Spirit. This was pure joy, watching seasoned Pentecostal Heidi explain being totally yielded to Jesus and open to receiving an unmerited gift. We laid hands on people and saw the Spirit touch them. Many had visions and spoke in tongues for the first time: not Portuguese, not Macua… but languages from another realm not of this world.

Anna is the third of Gracie and my three children to go with me on a mission adventure at age 13. We had a great time together watching movies on the airplanes, eating out, going to a game park, swimming and even scuba diving in the Indian Ocean, drinking coke, going on outreaches and praying for people’s healing together. Anna has had the impression that God only helps and heals poor people and criminals. But when she got violently sick on the last day in Mozambique and I sent out a desperate email for prayer and she saw God come to rescue her through many divine appointments with people who prayed for her and a doctor from Cameroon we met in the Johannesburg airport who treated her. We made it home safe and sound and invite you to pray with us for our friends in challenging places.