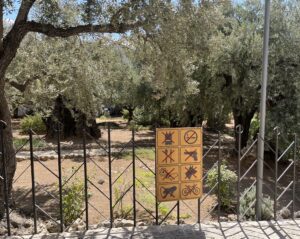 The conflict in Ukraine has been rapidly escalating, drawing Western nations deeper into war with Russia– with increasing and grave risks of a nuclear confrontation. Followers of Jesus are inclined to take the side of the victim (Ukrainians), opposing powerful perpetrators (Putin and his oligarchs), which means agreeing with NATO’s efforts to support Ukraine in its campaign to expel Russian invaders from its territory using the means of modern warfare. Russian Orthodox Christian supporters of Putin are led to believe Russia is the victim of NATO aggression, a perspective which is used to justify Russia’s invasion of Ukraine.

Jesus-followers thus become directly identified with killing, destroying, deceiving, hating, shaming and all available means to defeat the enemy– representing a complete break with Jesus and his way of suffering, victorious love.

Now is the time to look to Jesus as he faced unjust perpetrators, and take seriously his call to his disciples. If we believe he is the Messiah, the Christ who is Savior of the world, how should we respond to superpower aggressions?

Christ-followers in the Ukraine, Russia, the USA, UK and other NATO countries, and throughout the world, must consider how to effectively bear witness to Jesus and his kingdom “not of this world,” and renounce the logic of violence and war.

The United States and its NATO allies are currently supplying Ukraine with billions of dollars of weaponry, intelligence and guarantees of support “as long as it takes.” These weapons are being used to kill Russian soldiers, blow up bridges and destroy infrastructure, while economic sanctions are aimed to make this invasion even more costly for Russians.

While Russian aggression is rightly denounced, and Ukrainians (and Russian soldiers) understandably seek to defend themselves, President Volodymyr Zelenskyy and Western leaders, military experts and the media seem to go out of their way to shame and provoke Russia.

Every day I read accounts where world Russia’s military ineptitude are exposed in detail (see). In contrast, every advance of the Ukrainian underdogs are lauded. Zelenskyy, Biden and European leaders tell Russia to withdraw and accept defeat. This brings shame on Russia, effectively pressuring Putin and his supporters to up their game and succeed, escalating the war. Shaming and hating on Putin is risky behavior in the light of his threats of using nuclear weapons. Yet public distain seems to be only increasing.

When an explosion caused the Kerch Bridge linking Russia to Crimea to collapse on October 8, the day after Putin’s 70th birthday, many Ukrainian officials and social media posts, mockingly presented this act of sabotage as his birthday gift. The next day Russia fired a barrage of missiles in retaliation, and Western media showed that the majority were intercepted before they hit their targets. While stopping killer missiles is certainly good news, publically celebrating these successes and highlighting how outdated and ineffective they are, further shames Russia, and is used to justify draing NATO further into the conflict as they send more Western air defense systems to Ukraine.

It doesn’t take 28 years of serving as a chaplain to inmates in jails and prisons to know that shaming a tough-guy bully only escalates conflict. The current approach is propelling us towards a nuclear Armageddon, and Christ-followers seem largely silent, sometimes even cheering for the underdog team like this is a sports event.

Ukrainian leaders decry Putin as a “terrorist,” and war criminal, and Biden went as far as accusing him of genocide. Human rights abuses and infractions against international law must certainly be investigated. The International Criminal Court (ICC) is currently investigating Russia’s possible war crimes in Ukraine (see). However, American and UK leaders responsible for the invasion of Iraq in 2003 are themselves vulnerable, showing the difficulty in prosecuting the leaders of the world’s most powerful nations (see).

Jesus followers should be praying for world leaders (including Putin), and seeking non-violent approaches to resolving conflict. World leaders should be encouraged to do everything possible to push for negotiations, and offering Putin face-saving offramps, which currently aren’t even on the horizon. Zelenskyy recently said he will not negotiate with Russia as long as Putin is President (see).

Jesus’ actions and words in the Garden of Gethsemane on the day of his arrest point the way forward for his followers as we contemplate how we resist injustice.

In the Garden of Gethsemane on the night of his arrest, Jesus calls his followers to join him in watching and praying to avoid temptation. What temptations would have there been for Jesus and his disciples?

I could imagine disciples being tempted to fight to defend Jesus, or to abandon his way of saving the world out of fear, unbelief, pride or outright embarrassment. Temptations to choose self-preservation, violence, or submission to the status quo are certainly present now, drawing people away from Jesus’ call to watch and pray so as to align with him in the midst of dire situations like the war in Ukraine.

Right after Jesus celebrates the Passover with his disciples before heading to the Mount of Olives where he’s arrested, Jesus tells his disciples plainly.

“You will all fall away because of me this night,” states Jesus, comparing his disciples to sheep that are scattered when the shepherd is taken out (Mt 26:31).

Despite this matter-of-fact prophesy of their desertion, Jesus assures disciples of his victory over death and unfailing commitment to them:

Peter states his commitment to stick with Jesus through whatever comes, saying: “Even though all may fall away because of you, I will never fall away” (Mt 26:33).

Despite Jesus’ assurance that he will deny him three times that very night, Peter says: “Even if I have to die with you, I will not deny you.” All the disciples said the same thing too” (Mt 26:34-35).

Jesus then asks his disciples: “Sit here while I go over there and pray.” He takes Peter and the two sons of Zebedee with him and becomes grieved and distressed. He tells them:

“My soul is deeply grieved, to the point of death; remain here and keep watch with me.”

In Luke’s account Jesus “was praying very fervently, and his sweat became like drops of blood, falling down upon the ground” (Lk 22:44).

Jesus’ deep grief and call to stay and keep watch with him shows how difficult it is to choose him and his way of confronting evil- a warning that we should prepare ourselves appropriately, perhaps like extreme alpine climbers or athletes prepare for their challenges. It also shows that Jesus calls us his followers to join him fully.

Jesus then goes beyond them, falls on his face and prays: “My Father, if it is possible, let this cup pass from me; yet not as I will, but as you will.”

Jesus himself acknowledges the extreme difficulty of his position. He then returns to his disciples and finds them sleeping. He says to Peter:

“So, you men could not keep watch with me for one hour? “Keep watching and praying that you may not enter into temptation; the spirit is willing, but the flesh is weak” (Mt 26:40-41).

Jesus knew temptation first hand. After his baptism in the wilderness Satan tempted Jesus to use his supernatural powers for his own security needs or fame, and to pledge allegiance to himself as the ruler of this world to gain power. He most certainly could have been tempted to overthrow the Jewish religious leaders who opposed him or to rid his homeland of the Roman occupiers.

Jesus acknowledges his disciples spiritual willingness, and also names the weakness of their flesh. He tells them to “keep watching and praying,” as the way to “not enter into temptation,” detailing an approach that he sees as not only possible but essential.

Right then Judas arrives, leading the arresting mob. It is then that one of disciples, (which we know to be Peter from other Gospel accounts but could be any of them, or us, in Matthew’s account), draws his sword and strikes the slave of the high priest, cutting off his ear.

“Put your sword back into its place,” says Jesus, standing in his strength he must have gained from his anguishing prayer vigil. Luke’s Gospel adds that an angel appeared to him, strengthening him there in the garden (Lk 22:43).

“For all those who take up the sword shall perish by the sword. “Or do you think that I cannot appeal to my Father, and he will at once put at my disposal more than twelve legions of angels? “How then will the Scriptures be fulfilled, which say that it must happen this way?” (Mt 26:52-54).

In a recent visit to the Garden of Gethsemane I was struck by the X through the firearm symbol on a sign at the garden’s entrance (see above)– a reminder of the need to resist the temptation to justify or engage in violence of any kind. 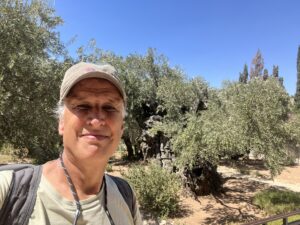 A sign just opposite the entrance to the Garden in English and German reminds us that the disciples ran from Jesus and his way of being Messiah and saving the world– and calls believers to prepare to lose our lives for him. 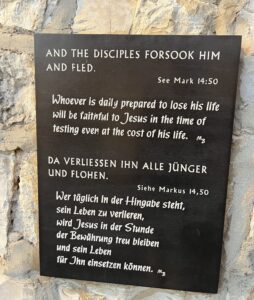 Now is the time to resist the seductive sleep that took out Jesus’ disciples and threatens us now, removing us from the essential work of watching and praying. Temptations to hate, to agree with justifications of violence and war, to engage in partisan political divisions, to escape into distractions, or to abandon faith completely can only be effectively resisted through staying close to Jesus.

Thankfully he loves us despite our weakness, and never gives up on us, even when we betray him, defend him using violence, deny him or flee. He can teach us to be peacemakers, resisting the evils of this age with the weapons of the Spirit and the wisdom of tried-and-tested approaches to of non-violent direct action (see). May we commit ourselves afresh to fight like Jesus.

On that note I highly recommend a recent book by my friend Jason Porterfield, Fight Like Jesus: How Jesus Waged Peace Throughout Holy Week (see below).  I  also  highly  recommend  this  article  on  Ukraine  by  Chris  Hedges. 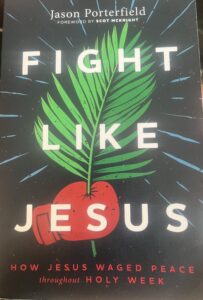