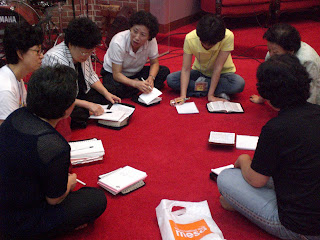 For the past five days I have been teaching a group of 100 grass roots leaders from 20 countries gathered here for a month at the Holy Given School in Seoul, Korea. My friend Lesley-Anne, a veteran missionary from New Zealand is the firey founder of these radical mission schools that she coordinates around the world (www.holygiven.org). Korean pastor Deborah has gathered her friends from Korea and the world to partake in a feast of worship, teaching on the ministry of Jesus, healing, deliverance, ministry strategizing and exotic & sumptuous Korean food.

People are visibly hungry for teaching and a fresh touch from the Holy Spirit—and it’s a great joy to minister here. Healing and deliverance happen in many of the sessions– like yesterday when a young woman from N. Korea began weeping over the terror and shame of her life. Her three siblings had been killed by the authorities and she’d been raised by abusive people. She came to faith in Christ the day before. Amanda, another New Zealander gathered other women around her to pray through her pain.

I led a session on the importance of forgiveness of our fathers and mothers. Nearly everyone came forward for prayer and people wept aloud as I led them through prayers. One African man from Lesotho told how he had never been touched or shown any kind of affection by his father or grandfather. Rather they beat him regularly with sticks. Crying was not allowed, as men don’t cry. He is a pastor with a deep heart of love for his nation. He longs to see men come into his rural church but laments they see needing God as a sign of weakness that would bring them unbearable shame.

Today I taught on reading Scripture at the margins and led a Bible study on Hagar in Genesis 16. I broke people into groups and had them identity the forces that oppress them and how they feel. I had each group name a scribe and share their answers. I sat there and took notes in amazement, feeling moved and privileged to hear people’s raw and real responses.

Koreans talked about fearing parents and authority figures who pressure them to do things they don’t want or that are beyond their capacity. A woman said she felt pressure to be recognized and approved by God. A young man told how he felt forced to conform to the misery of the status quo and his longed to move out of society and start over. An older woman said “imagine being married to the men who pressure people to conform. Many women feel oppressed by their husbands and want to escape their marriages. Sometimes we wish they would just disappear.” Men from India talked about spiritual oppression and confusion from the 3 million gods and goddesses worshiped in their nation. A young woman from Singapore said she and others of her generation feel oppressed by money and the endless pressure to achieve.

People from Mozambique, Zambia and Lesotho mentioned HIV/Aids, witchcraft, poverty, violence and polygamy. A Pakistani mentioned fear of Islamic terrorism directed against Christians. Others ministering in Islamic countries mention the fear of being discovered, persecuted or expelled for being Christians.
We talk through Sarai and Abram’s abusive treatment of their Egyptian servant Hagar in Genesis 16:1-6 and people see direct comparisons to their lives. We discuss at length in small groups how the messenger of the Lord finds her by a well and offers her a new life of dignity and hope.

“When Hagar fled into the desert she had no choice and no options. She was a slave and couldn’t return to her master or to her country. There was no other way forward for her apart from the Lord appearing to her and helping her,” a woman comments.

People are moved by how the Lord calls her by her name, asks her about her life and promises her great blessing—regardless of her low status. He sends her back, which people interpret as a call to live under structures of oppression knowing that God sees, does not approve but is with them too bless them. People look encouraged. Many will soon be going back to dark and difficult ministry contexts.

Tomorrow we go to the demilitarized zone at the border of N. Korea. Sunday I fly home after preaching. Please keep all of us in your prayers.