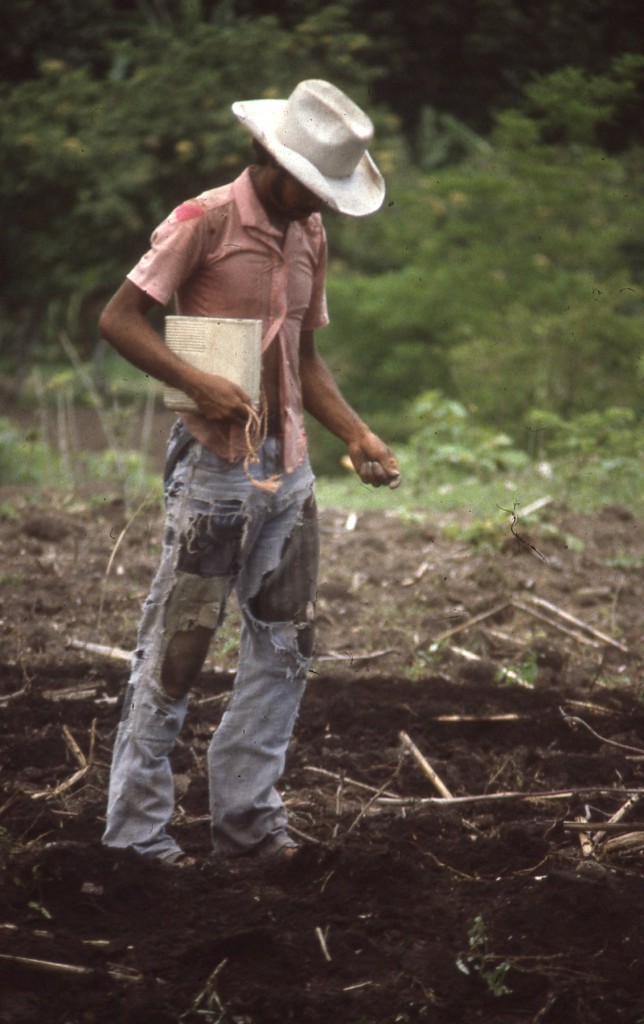 This past week I’ve rediscovered one of Jesus’ parables that I often read with impoverished farmers in Honduras.  Reading Matthew 13 with inmates and at Tierra Nueva has proved fruitful, and deeply encouraged me as I’ve heard good news echoing back.

I start out sharing with a jail-room full of mostly construction workers, mechanics, welders, electricians and farm workers how Jesus was working class, the son of a carpenter, a man whose hands were likely calloused.  According to the Gospel accounts he mostly hung out with ordinary people, frequenting normal, non-religious place: roads, sea, mountains, villages and homes.  I invite someone to read Matthew 13:1-2

“On that day Jesus went out of the house, and was sitting by the sea.  And great crowds gathered to him, so that he got into a boat and sat down, and the whole crowd was standing on the beach.”

I’ve seen how this kind of beginning helps people envision Jesus as closer, and opens them to hearing his teaching as possibly more relevant.  Next, before reading the parable of the sower in Matthew 13:3-9. I talk a bit about the basics of planting seeds.

During our years in Honduras I learned what Jesus’ audience would have already known.  Seeds are food, whether they be wheat, corn, rice or beans.  Planting seeds requires sacrificing a part of your food supply.  For poor farmers who suffer shortages of basic grains, saving seed once the food supply has run out is difficult.  Farmers who depend on seasonal rains to water their crops are usually planting or watering when their grain reserves are at optimal value.  Good farmers carefully prepare the soil and plant with deliberation.  Knowing this prepares us to hear Jesus’ parable the way First Century Palestinian peasants likely would have heard it.

The sower in Jesus’ parable appears reckless.  Seeds fall beside the road where they’re snatched up by birds, on rocky ground where they sprout up quick but then wither in the sun; among the thorns where tender shoots are choked out and finally into good soil where they produce an abundant harvest.   “How would other farmers view such a farmer?” I ask.

“Careless and irresponsible,” someone says.

“He doesn’t discriminate but throws seeds everywhere,” says someone else.

The idea that this sower doesn’t discriminate or judge gets people’s attention.  Many of the men are used to experiencing different kinds of discrimination: exclusion from jobs because they’re felons, from drug court because they have violent offenses, being shunned by family because of their addictions, being pulled over by cops because of their skin color…

We discuss about other explanations for the sower’s planting tactics: that he carries an abundant supply of seed, that his planting approach is marked by faith and not wastefulness as he believes that even unlikely places can produce, that he may consider the seed especially powerful.  I invite people to read a relevant text from Isaiah 55:10-11 regarding the abundance and potency of God’s word.

“For as the rain and the snow come down from heaven, and do not return there without watering the earth, and making it bear and sprout, and furnishing seed to the sower and bread to the eater; so shall my word be which goes forth from my mouth; it shall not return to me empty, without accomplishing what I desire, and without succeeding in the matter for which I sent it.”

The sower’s generosity and faith has inspired and motivated me— in our leading of weekly Bible studies in rural Honduran villages, or in jails, prisons and seminaries. I have seen thousands of people receive the seeds of God’s word, but harvested relatively little that we’ve been able to see.  I have clung to Isaiah 55 and feel my faith enlivened as I read it again.

“God’s word is raining down 24/7 and is effective at its mission,” I say as a statement of faith.  And yet we see from Jesus’ explanation of the parable in Matthew 13:18-23 that in spite of the sower’s liberal, faith-filled sowing, problems on the receiving end can block productivity—and we at Tierra Nueva have certainly experienced this.

Jesus states that the seed is God’s word, and the different soil conditions represent people who hear God’s word.  Seed that falls beside the path is like seed that doesn’t penetrate into one’s mind and heart because of a lack of understanding (v. 19).

I pull out a vitamin that happens to be in my pocket, hold it out and drop it on the cement jail floor.  It does not penatrate but it bounces, and the inmates can see clearly that something could easily snatch it up.

“If seeds are God’s words, how do they enter into us?” I ask.   Answers include “through our minds,” “through our experiences,” and finally “through our ears.”  The idea of vitamins (or seeds) entering people’s ears makes some of the guys laugh.  Yet the graphic illustration brings home Jesus’ final words: “He who has ears, let him hear!”

Jesus invites personal responsibility.  Like the Old Testament prophets Jesus calls people to hear— emphasizing receiving the word to the point of understanding.  Predatory evil is lurking, ready to snatch what doesn’t enter.   Jesus’ learners need to be aware of this and seek understanding.  Rocky soil represent those who accept God’s words “with joy”, but lack depth (of understanding?).  These words dry up in the face of opposition and people fall away—an experience that many in the room say they can relate to.  Finally the seed that fell among the thorns are words that get choked out by worries and the seductions of wealth—and Jesus’ realism here makes us all trust him as we can all relate.

We are inspired together by the final possibility—that of being the good soil that produces at different levels of abundance due to our understanding of the word.   But how then can we grow in our understanding?

It is clear from the entire story that coming to Jesus as learners is the key to gaining access to the mysteries.  I invite the men into the center of the text—without venturing into the most difficult terrain of Matthew 13:12-17, at least not in this Bible study.  In Matthew 13:10 the disciples came and said to Jesus: “Why do you speak to them [the crowds] in parables?”  Jesus responds: “To you it has been granted to know the mysteries of the kingdom of heaven, but to them it has not been granted.”

Luke’s account adds precision as Jesus’ disciples “began questioning him as to what this parable might be” (Luke 8:9).  Coming to Jesus with our questions results in understanding.  Relationship with the sower—the receiving ground with the one who plants results in the word producing!

The sower is certainly Jesus himself, who in the Luke 8 account is depicted just before as going about from one city and village to another, proclaiming and preaching the kingdom of God.  Jesus had seen his seeds produce in hard ground, and his traveling party witnesses to his fruitful ministry: twelve disciples and “some women who have been healed of evil spirits and sicknesses”—including Mary who had had seven demons cast out!

Over the course of seven Bible studies on this text in the past eight days I have  seen in people’s eyes levels of understanding.   On each occasion I myself experienced Jesus’ words sinking deeper into my heart. I have felt freshly inspired as one of Jesus’ disciples to persevere in my indiscriminate sowing, and also to receive with greater deliberation.  I can see the sower’s persistent generosity in my own life, and note each of these different soil conditions in myself in a single day.  I can see that God’s word keeps falling into me, regardless of my receptivity.  I am moved by divine generosity and am inspired to hear and understand.

May you receive the powerful seeds of God’s word into your heart, with the promise of abundant harvest.

The People’s Seminary invites applicants to the following courses:

“Towards  a New Theology and Practice of Liberation,” London, September 10-13, All Saints, Woodford Wels, Gilles Boucomont and Bob and Gracie Ekblad. 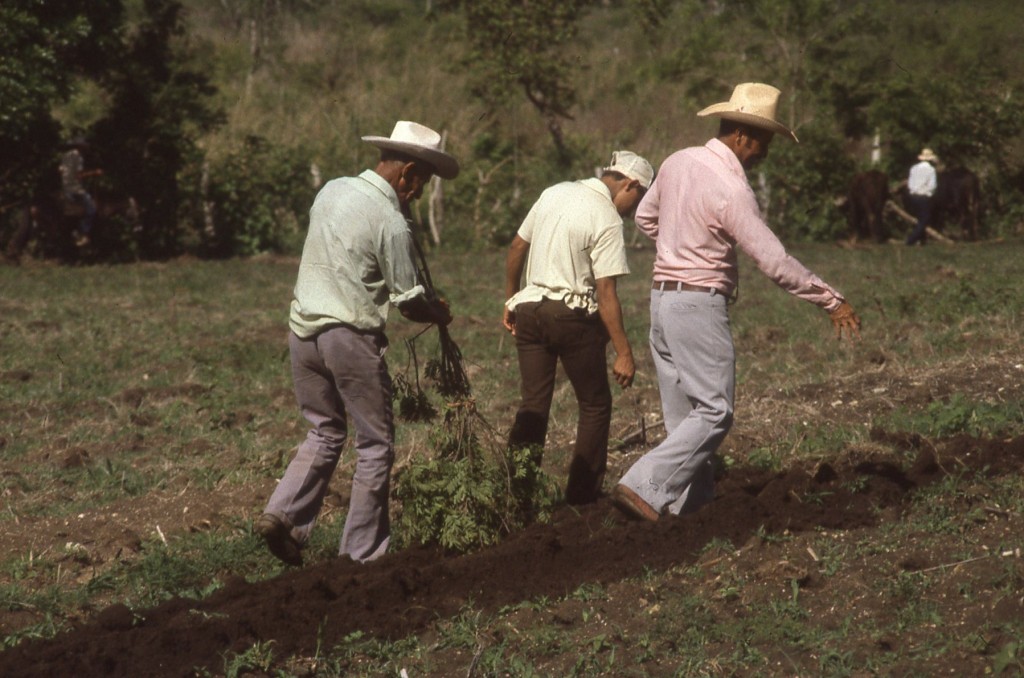