This November as the weather has become rainy and cold our Friday afternoon Bible study in the park shifted focus to attending to people on the streets of Mount Vernon. For three weeks now we’ve been meeting outside Safeway for a brief Scripture reading and prayer. From there we divide up into groups of two to three, heading out on foot into the surrounding area where many unhoused people hang out. Each group carries a thermos of hot water, cups, hot chocolate and cider packets, Cup-a-Soups, gloves, hats, and socks.

The first Friday my group included three children and their mom, Jason and myself. One group headed West across a parking lot in search of people. We headed across the front of Safeway and approached an older man who leaned against his bicycle beside a younger man I recognized from jail, who was talking agitatedly on a cell phone, clearly high on something.

I asked the older man how he was doing and if we could pray for him about anything. He said yes, he wanted prayer. He hadn’t slept for several days. He said he was unable to get into lodging as he didn’t want to disclose his name. He said the Cartel was looking for him to kill him. He shared how tired he was of seeing so many of friends die of fentanyl overdoses.

Just as I was about to pray he took off on his bike towards the other entrance to Safeway, hoping to intercept the younger man, who he said had just taken off running into the store in an attempt to steal his phone. Unable to find either of them, we headed across the parking lot towards People’s Bank.

There we found two men sitting against the wall of the bank. We slowly approached them, letting them know we were from Tierra Nueva, there to offer prayers and hot drinks. One of the men said, “Hey no thanks,” and left. The other guy asked for a cup of hot chocolate. I told him my name and asked him his. “Moonbeam,” he said, and I couldn’t make out anything else he was saying.

Jason, who has spent years in prison and on the streets, asked the man if there was something wrong with his foot, as he’d seen him adjusting it uneasily in his boot.

“We can effing pray for your foot if you want,” he said. “Bob here was even healed of effing Lymphoma, and I’m sure Jesus can help you too,” he continued.

Moonbeam said his foot was all messed up after someone stomped on it, and then he had an infection on top of that. I asked if he had pain in his knee. He pulled up his pant leg to show that his knee was skinned. Jason then asked him his name, and he said he was Jake. Jason prayed a beautiful prayer for his healing and comfort. As people in our group said goodbyes and started heading off towards the back of Safeway to look for more people, Jake called me over and said with total clarity:

“Psalm 34:18. The Lord is close to the brokenhearted; he rescues those whose spirits are crushed.”

I have often seen people incoherent due to addiction or mental health issues come to sudden clarity during prayer. In Jake’s case he cited a powerful verse by heart, which totally fits the moment as a kind of prophetic declaration and invitation.

The Lord is close to the brokenhearted ideally through you and me, as we respond to the Spirit’s promptings to “rescue those whose spirits are crushed.”

We made our way on foot behind Safeway, where we spotted a group of people at the edge of a big field beside some rubble and shrubs. We headed towards them, and then recognized the older man on his bicycle, who had recovered his phone. The younger man had his blow torch out and was smoking fentanyl behind the shrubs with some others. We asked the older man if he still wanted prayer, and he said he did. We gathered around him and prayed for him and the others.

Later we tried unsuccessfully to find lodging for the older man, and Jessica gave him some coveralls and a latte from Starbucks.

It felt like a sacred privilege to try to embody God’s closeness to the brokenhearted, whose spirits seemed so crushed.  We’ve continued these weekly outreaches, which are drawing others from our faith community—many of whom have themselves been addicted and homeless—all of whom have lost loved ones to overdose deaths. We pray for Jesus’ rescue to become real now, before we lose still more to this growing opioid pandemic that’s taken so many lives.

Check out my book on the first miracle story after Pentecost outside the Beautiful Gate– a treatise on Jesus’ embrace of the excluded. 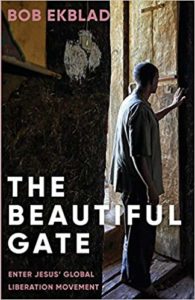