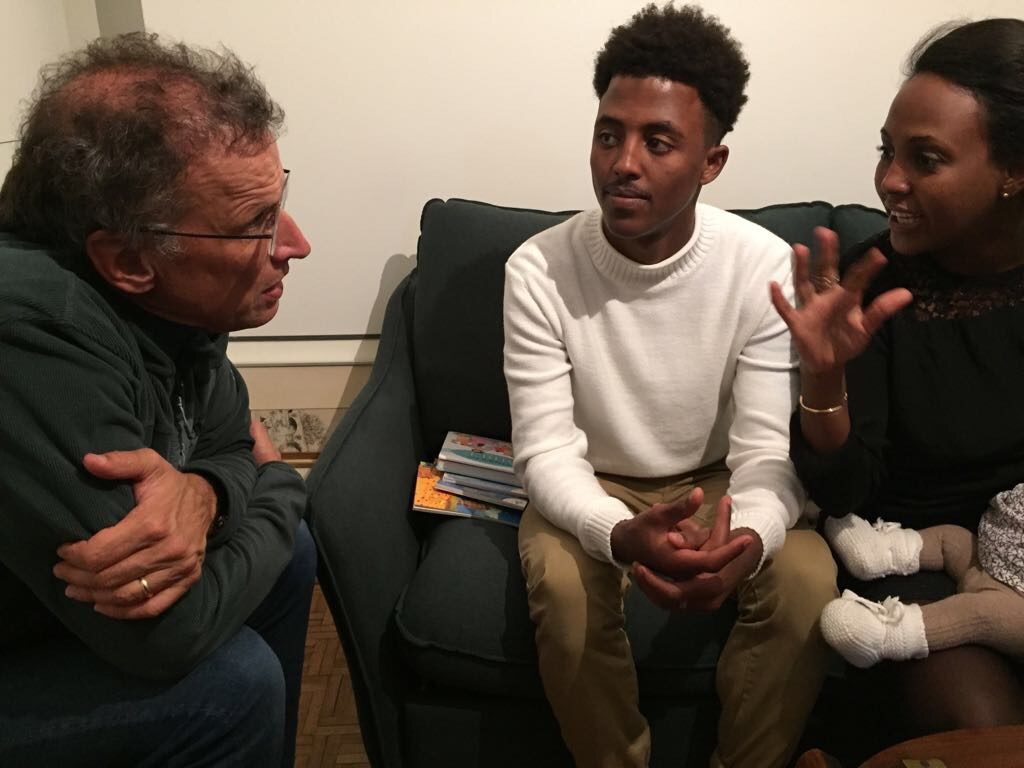 I have been closely following the European refugee crisis due in part to my regular teaching of mission courses in the UK and around the world. Two years ago I visited the refugee camps in Calais, France, where I met refugees from Ethiopia, Eritrea, Somalia, Sudan, Iraq, Iran and many other countries (see update) who were seeking entry into the UK.

Months before visiting Calais I had run into Ismahan, a friend from Ethiopia living in Paris. She had visited us at Tierra Nueva back in 2009 before moving to France. It was then that I connected her to a church in Paris where we have close ties. When I saw her I told her about my plans to visit Calais and asked if she had any contact with East African refugees in France.

Ismahan became distressed and told me that her 15-year-old brother was being held captive in Libya and was in grave danger of being killed. She shared how her brother had paid a trafficker to bring him from Ethiopia to Europe. In Libya he’d been captured by pirates, who were demanding $12,000 ransom. She asked if I would accompany her to a part of Paris where there were lots of refugees. She hoped to find someone who might know how to effectively get ransom money to the traffickers to secure her brother’s release.

That afternoon we headed to a metro stop where East African refugees are known to congregate. Almost immediately we met an Ethiopian man who introduced us to Eritreans who’d arrived that day from having just crossed over by boat from Libya to Italy. He guided us to an abandoned school where over 500 refugees from many countries were squatting in crowded, miserable conditions. We ended up praying for a number of people there, and the reality of the European refugee crisis suddenly became all too real for me (see past update). We raised some funds to help pay the ransom to free Ismahan’s brother, and she was able to arrange her brother’s release.

On our recent trip to Paris this Fall, Ismahan introduced us to her brother Aydarusse, now 17, who has finally made it to France (photo above). He told us how his captors held him in a shipping container full of other mostly young migrants in the desert for three months (read more here). His captors regularly tortured him and the other prisoners, some to the point of death. They would hang him and other hostages by their wrists and whip them on a daily basis—calling their family members threatening to sell them as slaves, or sell their organs if they didn’t send money immediately. When his captors finally received their ransom Aydarusse was released, put on a boat full of migrants.

“There was nobody to guide the boat full of refugees,” he said. “They just gave us the GPS coordinates for Italy and sent us across the Mediterranean.”

The boat behind them capsized and hundreds of people drowned, including one of his close friends. He made it across to Italy and spent a year in a refugee resettlement camp before Ismahan was able to arrange his passage to Paris. Since his confinement in Libya, he has been suffering from anxiety and seizures. Though he considers himself a Muslim he asked us to pray for him. What a privilege to have this opportunity to hear his story and minister the love of Jesus to him!

On November 5 during a layover in Paris from Ethiopia I preached at a special international service with French, Japanese and Egyptian congregations gathered at Eglise Protestante Unie du Marais (watch here in English and French). I had been asked to preach on Isaiah 58, the biblical text at the heart of my pastoral call.

I shared how I’ve been struck afresh by God’s word to the prophet: “Cry loudly, do not hold back; raise your voice like a trumpet, and declare to my people their transgression and to the house of Jacob their sins” (vs. 1).

Why is the prophet to speak so strongly about the people’s sins?

God, too, notices his people’s spiritual quests. “They seek me day by day and delight to know my ways.” They ask me for just decisions, they delight in the nearness of God” (58:2). However God is not impressed, seeing and exposing social sins blocking their relationship with him and with each other.

“Behold, on the day of your fast you find your desire, and drive hard all your workers. Behold, you fast for contention and strife and to strike with a wicked fist.”

Isaiah exposes and denounces spirituality devoid of social compassion and equity. Here God dismisses religion practiced by people who’ve hardened their hearts to the plight of the poor. Isaiah’s message seems highly relevant to our times.

I wonder what the equivalents of this would be today. I know how easy it is for me to justify consumerism, and hostility around politics. Today’s growing lack of civility sadly includes many Christians, and tough attitudes towards immigrants, certain kinds of transgressors and national enemies are certainly on the rise.

Through the prophet God calls the people to a spirituality that involves them becoming agents of freedom to people who are oppressed.

“Is this not the fast which I choose, to loosen the bonds of wickedness, to undo the bands of the yoke, and to let the oppressed go free and break every yoke? Is it not to divide your bread with the hungry and bring the homeless poor into the house; when you see the naked, to cover him; and not to hide yourself from your own flesh?”

According to Isaiah 58, abundant life, recovery and deep spiritual connection with God will happen when we take action against injustice and engage concretely with people in need around us.

“Then your light will break out like the dawn, and your recovery will speedily spring forth; and your righteousness will go before you; the glory of the Lord will be your rear guard. Then you will call, and the Lord will answer; you will cry, and he will say, ‘Here I am.”

Hearing God’s voice and being guided spiritually are intimately linked to acting compassionately towards hurting people around us.

“And the Lord will continually guide you, and satisfy your desire in scorched places, and give strength to your bones; and you will be like a watered garden, and like a spring of water whose waters do not fail.”

As I shared these thoughts and the story of Aydarusse, Ismahan suddenly noticed that her brother was standing at the back of the church with a big smile on his face. The whole congregation broke out in cheers. Many had contributed so he could be released.

Currently I am in contact with a Salvadoran pastor named Giovanni who had to flee El Salvador due to his prison ministry to gang members. He himself is a former gang member and was being targeted and persecuted by law enforcement. Upon entering the United States this past August he was arrested by Immigration and Customs Enforcement (ICE) agents, and is being held in detention. Giovanni continues to share his faith with fellow detainees and is making a big impact. However he has just been given the opportunity to bail out to pursue his claim for political asylum, but needs $5000 for bail. Consider helping him bail out so he can rejoin his wife and son, now in Washington State (see our Gofundme campain here).

May you open your heart afresh to the living God and to vulnerable people around you during this season, as you celebrate the birth of Jesus, the world’s Savior.