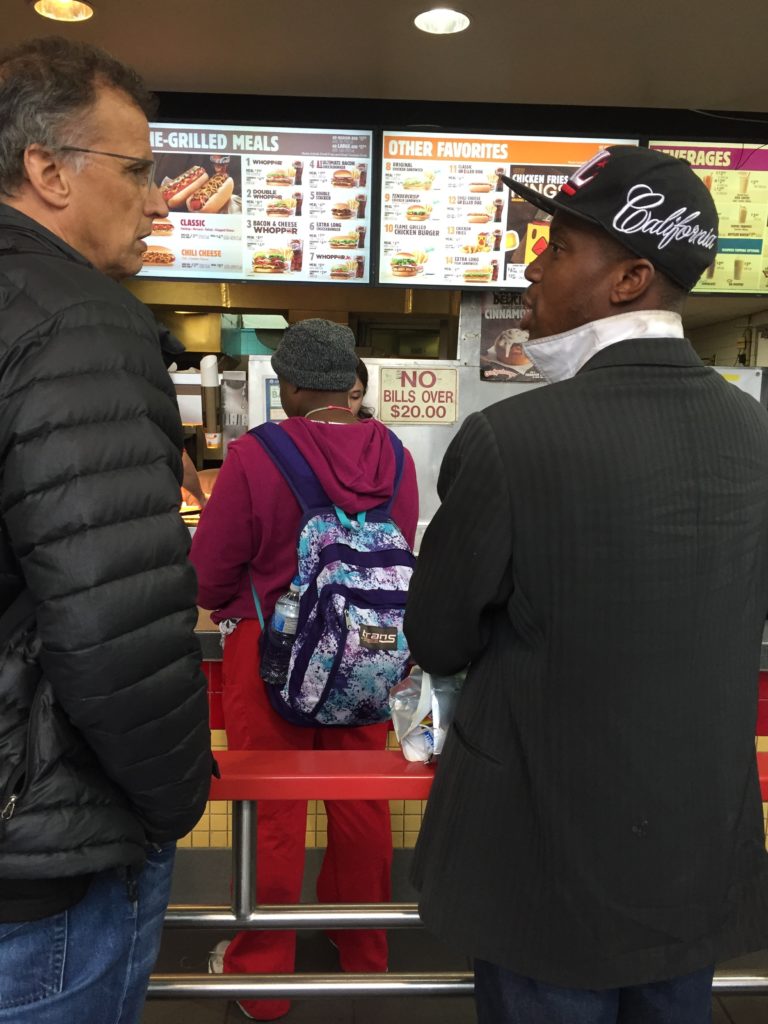 Last Friday Gracie and I flew to San Francisco to visit friends and speak in a church. From the airport we made our way to the BART (Bay Area Rapid Transit) and took the light rail into the city. Once comfortably installed in our seats I pulled out my laptop and started working on a talk for the next day on reading the Bible for personal and social transformation.

A young man started shouting loudly further up the train, a common occurrence in subways in Paris where I’d been a few weeks earlier. Vagabond performers often board the metro with a short act and make rounds with a hat for donations. Homeless people or gypsies regularly beg, sometimes after some kind of speech—and people mostly ignore them. I was able to tune the voice out so as to concentrate on my presentation. Other passengers had their faces in newspapers or books. Most had ear buds securely in place to shut out the distracting sounds.

The voice was getting louder and increasingly agitated but very articulate. It broke through my concentration in blasts, disrupting my focus:

“Look at all of you, hiding behind your laptops and newspapers, shutting me out with your ear buds and iPhones. Why can’t you just acknowledge me by looking at me? I am not going away, and neither are the 10,000 other homeless people here in San Francisco who suffer on the streets. All of the homeless shelters are filled and I have no place to sleep tonight.“

His voice grew shriller and more hostile as he made his way down train towards us. I could feel other passengers discomfort and annoyance. I found myself wondering for a moment what I’d do if he got right in my face. I even pondered whether he might be the type who could pull out a gun. At this point I hadn’t even looked over at him but was still buried in my laptop, using my café-sitting skills to tune him out.

“Do you realize how painful it is to be homeless and have people ignore you like you don’t even exist?” He continued like a prophet, piercing through my defenses.

“It hurts to be treated like you’re invisible. I am a person just like you people. But look, right now not one of you will even look up and make eye contact with me. Can’t somebody simply acknowledge my existence?”

Suddenly I felt compelled to close my laptop and respond to him in some way. I got up and made my way over to him as he stood in the closed doorway of the moving train, nearing the end of his tirade. When he stopped I tapped him on the shoulder and spoke:

“Sir, I want you to know that I am listening to you and am deeply moved by what you are saying. I am sad that you feel so ignored and rejected and can see that you are in a lot of pain. You are getting through to me and I want to thank you for sharing your feelings.”

He looked up stunned and said: “Whoa, I’m not used to anyone responding to me. Nobody ever does this man.”

“What’s your name?” I asked. “Sean” which he pronounced seen. I then told him that God notices him all the time and knows his pain. I asked him if I could pray a prayer of blessing over him.

“Yeah, you can pray for me,” he said. “But would you be willing to help me out with a meal first?” he asked.

“Gladly,” I responded, and we agreed to meet at Civic Center, where he said his favorite restaurant was located. Sean excused himself to finish his speech, and I sat down beside Gracie, noticing glances from fellow passengers who looked slightly relieved as he continued in a less agitated voice.

Sean met us as we stepped off the BART, and we followed him out of the station and up the stairs to the street level.

We had noticed when walking beside him that he shuffled along gingerly in oversized unlaced basketball shoes.

“What’s wrong with your feet?” Gracie asked. “Are you in pain?”

He told us that he had severed a tendon but that both of his feet were messed up from break dancing.

“There’s my favorite restaurant,” he said, pointing to Burger King across the street. He motioned for us to wait there against a storefront on the sidewalk for a moment, but I said that we really needed to be on our way soon.

“No, no. Just wait for six seconds,” he insisted.

Sean walked into the flow of pedestrians with his right hand out, gently saying “excuse me ma’am, excuse me sir” a few times to whomever was before him. We watched as pedestrians avoided him without acknowledging him in any noticeable way, like he was invisible. People consistently skirted him, looking down or in the opposite direction with expert ignoring.

Sean came back to us and said, “see the attitude that we homeless people have to deal with?” Gracie and I were amazed as we followed him across the cross walk to Burger King.

“We all need to be acknowledged, which is exactly what people are supposed to do towards God,” he commented, referring to a Scripture that I later located as Proverbs 3:6. “In all your ways acknowledge him, and he will direct your paths.”

We waited in line at Burger King and two separate homeless men approached Sean, asking him for something. He ordered and we sat down on some stairs heading up to a closed off seating area. At this point I asked him if we could pray for him or if he’d prefer to wait until his food came.

“Actually if you could pray for me before your next meal, instead, that would suit me just fine, if that’s okay” he said. “But would you mind if I prayed for the two of you?” he asked.

We accepted his offer, and putting a hand on each of us he began to loudly pray. “Our Father in heaven, mighty God, I believe. But help my unbelief!” He went on praying a long prayer quieting down as he became increasingly focused. “…Lord bless this couple with a happy marriage and a long life!” were some of his final words before a strong “amen.”

As soon as Sean finished his prayer Gracie said:

“It seems wrong that we leave you without praying for your feet. You are in pain. Can’t we just pray a short prayer for you?” she asked.

Sean resisted for a moment but then agreed to let us pray. I put my hands on his shoes and we spoke healing to his feet in Jesus’ name. We blessed him with God’s peace and protection. He was visibly moved. He got up to get his order and we headed out together towards our next cable-car like bus—the Muni (SF Municipal Railway).

As we crossed the street towards the Muni stop Gracie asked him whether he was noticing any improvement in his feet. “I won’t lie,” said Sean. “I do not feel the same as before.”

“Well then we must thank God and pray some more,” said Gracie as we reached the other side of the street.

We prayed for him and he received his healing in Jesus’ name. At this point Sean’s demeanor changed. He looked awestruck and we sensed the Holy Spirit touching us all in a deeper way. We said our goodbyes and watched him shuffle off a little faster with what looked like a new lightness in his steps.

As we made our way to the underground Muni stop we felt a lightness as it seemed God was directing our path. We felt inspired and even recruited by Sean to see and acknowledge other individuals, feeling carried along by the flow of God’s love.

A tall homeless man selling newspapers showed us where to buy tickets. We noticed that his hands were severely twisted and learned he was in a lot of pain from arthritis. He gladly accepted prayer for healing and we continued our journey to our friends’ house, wondering what other adventures this already inspired weekend would hold.

Announcement: This September and October The People’s Seminary is offering three new upcoming Certificate in Transformational Ministry at the Margins cohorts in London, Glasgow and Burlington. Click on the sites for more information and applications. 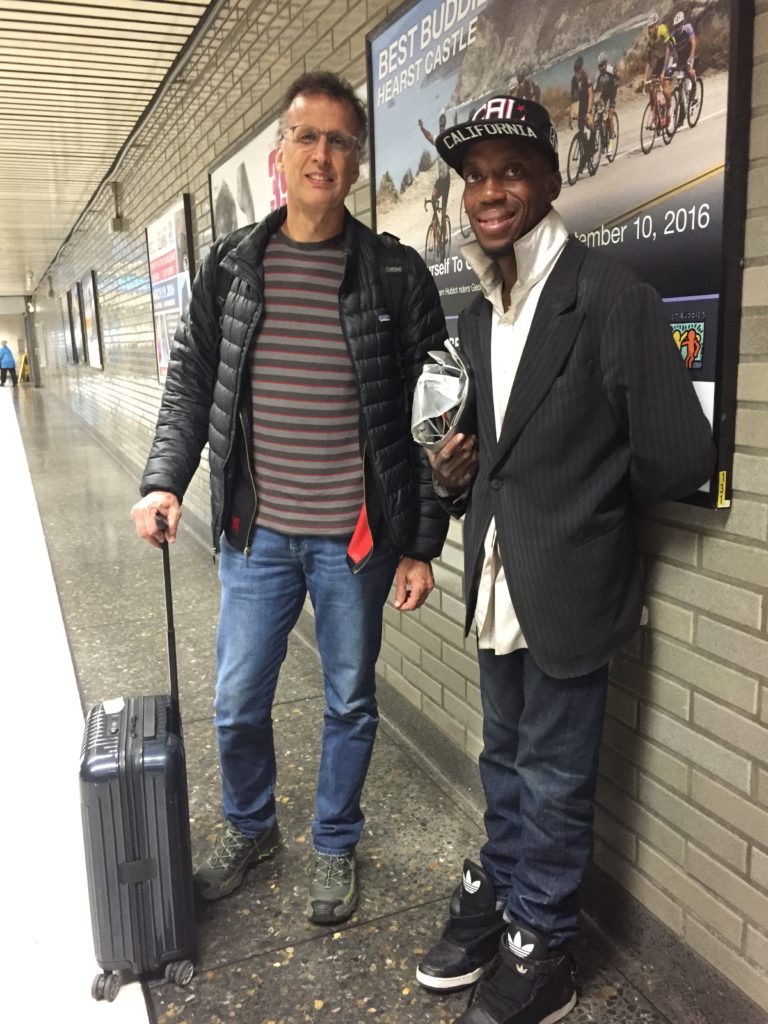