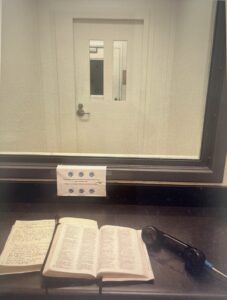 Meeting with prisoners one-on-one is refreshing and even delighting me, inspiring me to listen more closely to people and to the Spirit.

I was given the name of a man in our county jail from a woman in our Tierra Nueva faith community. She urged me to visit him as they’d been friends for years, and he is facing serious charges which may well result in a life sentence.

I waited in one of the lawyer’s booths until the guard brought him to the other side of the glass partition that separates visitor from inmate. He sat down, took off his mask, and we each picked up our black phones from the wall and got acquainted. He then shared with me some of the details of his charges and the possible sentence he’s facing.

We came to a pause where he suddenly became more self-conscious and seemed to begin to disassociate. I was praying for the Spirit to give me an inroad, a key that would help us get beyond this impasse. Suddenly it was like I saw writing on the inside back wall of his head, as if it was a screen.

“Are you someone with an especially good memory for details?” I asked, making an anxious attempt at an interpretation.

Then suddenly words from a Scripture came faintly into my awareness like a soundless text message:  “I have written my law on your heart.”

I made a quick decision to share with him what I was “noticing and hearing”, but first asked his permission. He nodded his agreement and I proceeded.

“Hey, as we were sitting here talking I had a flash vision of words written on the back of your head—on the inside. That’s why I asked you if you have a good memory, I was trying to figure out what I was seeing. Then the words “I have written my law on your heart” came into my head regarding you. I’m wondering if you’re a person who knows what is right, fair and just, and if you are especially sensitive to injustice– almost intuitively, like you’re consciousness and awareness are highly attuned?”

At this his eyes widened and he leaned forward, shaking his head in what looked like amazement.

“Yes, that’s really true,” he said. “And it’s been like that from the beginning. That’s crazy that you’re saying this,” he said.

“Actually these words are coming from a passage in the Bible,” I said, trying to remember where.

Then it came to me- somewhere in Jeremiah 31. I searched for Jeremiah in my Bible and scanned over the chapter and found it in verse 31, skipping over the first part about the house of Israel I read:

“I will put my law within them and on their heart I will write it; and I will be their God, and they shall be my people.”

I shared with him that the word “law” means teaching or instruction, coming from the Hebrew word Torah. I asked him whether this verse resonates with him in any way. Could it be that God is saying he has put his words inside you, and wants you to know he wants to be your God, and that he sees you as one of his people.

The man was nodding his head in agreement, looking really surprised and moved. I looked down at the next verse and asked if he was okay with me sharing it with him as it seemed relevant.

“They will not teach again, each man his neighbor and each man his brother, saying, ‘Know the Lord,’ for they will all know me, from the least of them to the greatest of them,” declares the Lord, “for I will forgive their [crimes], and their sin I will remember no more.”

I had exchanged the word “iniquity” for crimes on the spot, a fair translation that made it digestible to the man before me.

He was delighted by this verse and asked me to repeat it several times so he could remember it until he got back to his cell and could write it down.

I affirmed him as someone who God was highlighting as already in the know about spiritual things in ways that he could lean into. I told him about Jesus, coming into the world as God’s Son to save us. I assured him that Jesus is always there with him, forgiving his crimes and completely forgetting his sins.

The guard walked by the door, showing me his five fingers to let me know I had five minutes left for the visit. We prayed together and he asked me if I could keep visiting him. He then asked if I could visit some of his friends in his pod, and gave me five names. I’ve been visiting these men ever since, and three of them are now meeting daily, going through the Bible studies in Surprising Encounters with God, the first volume of Guerrilla Bible Studies. I returned home freshly inspired to re-read Jeremiah 31:33-34 for myself.