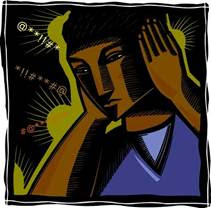 I have been especially pondering the last two verses of Malachi this Advent, longing to see more and more reconciliation that prepared the way for Jesus.

“Behold, I am going to send you Elijah the prophet before the coming of the great and terrible day of the Lord. And he will restore the hearts of the fathers to their children, and the hearts of the children to their fathers, lest I come and smite the land with a curse” (Malachi 4:5-6).

Elisha was always my favorite prophet of the Old Testament. His humility before his master Elijah was impressive and he ended up doing twice as many miracles: literally 14 to Elijah’s 7. So why was Elijah sent as a forerunner to the Messiah, and not Elisha?

My question was answered by Ron Kuykendall, an Episcopal priest friend from Florida who came and did some teaching at Tierra Nueva’s The People’s Seminary in September.

Ron taught that Elijah is the prototype spiritual father, and Elisha a prototype spiritual son. Elijah is the only Old Testament prophet who passed on a double anointing. Elijah embodies God’s heart: that our sons and daughters (spiritual or biological) would go far beyond us, standing on our shoulders. John the Baptist embodied this with his attitude towards Jesus: “He must increase. I must decrease.” He pointed to Jesus, “Behold the Lamb of God who takes away the sin of the world (John 1:29),” and not to himself. “After me comes a man who has a higher rank than I,” he continued.

Jesus surely had a much greater anointing. And yet he too embodied towards us his disciples the father heart visible in Elijah: “Truly, truly, I say to you, he who believes in me, the works that I do shall he do also; and greater works than these shall he do; because I go to the Father. And whatever you ask in my name, that will I do, that the Father may be glorified in the Son” (John 14:12-13). Surely Jesus sent us his Holy Spirit to empower us to continue in this same tradition, as we continue to prepare for Jesus’ final return: “the great and terrible day of the Lord.”

In the jail where I serve as chaplain most of the men and women are estranged from their fathers, and often their mothers too. Gangs are on the rise everywhere in part because of a crisis in father/child relationships. The church too is disempowered in part because of rivalries and ruptures that need to be laid down. I long to see the turning of hearts between actual biological fathers/mothers and daughters/sons and also between spiritual children and their parents. Reconciliation, healing and true empowerment begins with forgiveness, as the following story shows.

I first met Santos (“holy” in Spanish) twelve years ago when he was a 20-year-old Latino gangster doing six months in Skagit County Jail. Santos is unforgettable because of his warm, sensitive spirit. He also has a nervous wince that hits his left eye like a crashing wave every thirty seconds. Halfway through a Bible study about Jesus’ healing of a blind man by applying spit to his eyes two Thursday’s ago, Santos said: “I feel kind of vulnerable asking for this, but can you pray for me to be healed of this nervous tic in my left eye? It’s been bothering me my whole life, but more and more lately.”

With only five minutes before the guards came, I invited the other inmates to gather around Santos, and placed my hand on his left eye. Immediately I got the strong impression that his father had hit him in the head. I asked whether this was true, and Santos began to cry and say he was beaten a lot when growing up. Later he told me that as the oldest, he’d often taken the blame for things his younger brother and sister had done, to keep them from beatings.

I briefly told him that when someone sins against us, it brings great suffering, but if we hold resentment and unforgiveness, the sins of the other person infect and continue to hurt us. He said he was willing to forgive. I led him in a prayer of forgiveness, and he even began to bless his father. I prayed that the peace of Christ would come over his face and that the nervous flinching would be calmed in Jesus’ name. The presence of God came over all of us. It was very peaceful.

The next day, I called Santos to check on him. He said he was 100% healed and the twitching had stopped. I called him four days later and he says he’s still completely healed—the tic has not returned. He has had this problem for 32 years. “People who know me are all noticing it!” he said. He also told me that the night he forgave his father, his dad called his girlfriend’s house looking for him—something his father rarely if ever does.

I am profoundly grateful for this new beginning as hearts are turned and Jesus comes again, and I long to see more. May you experience this Christmas season reconciliation, healing and peace born out of forgiveness as you anticipate and welcome Jesus’ coming.